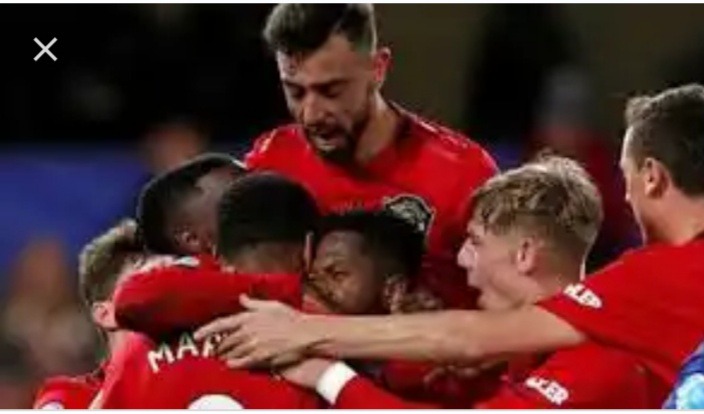 With two rounds of games remaining, Liverpool and Manchester City have already been confirmed winners and runners-up in the 2019-2020 Premier League season, but Chelsea, Leicester City and Manchester United are locked in a battle for the remaining two Champions League slots.

All three clubs have exhibited a high level of susceptibility thus far, but Manchester United have clearly overcome their erratic start to the campaign, stringing up impressive results following the arrival of their new icon Bruno Fernandes from Sporting Lisbon in January.

The Red Devils have enjoyed a rich vein of form after the restart and are unbeaten in 19 matches across all competitions.

On Thursday, the Ole Gunnar Solksjaer's side romped to a 2-0 win over Crystal Palace at Selhurst Park, taking their point haul to 62, same as fourth-placed Leicester City and a point less Chelsea in.third position.

The remaining two fixtures are by no means on the knife's edge for the three teams, but Manchester United are most likely to garner needed points to leapfrog Leicester City and even Chelsea to third and fourth positions respectively. Chelsea have their job cut out in their remaining two games. The Frank Lampard's team face a daunting trip to Anfield on 22 July, to keep a date with champions Liverpool and round off their campaign with a home game against bogey team and sixth-placed Wolverhampton Wanderers.

The Blues will likely lose to Liverpool, who are the smarting from their 2-1 defeat to Arsenal on Thursday at Emirates Stadium. Wolves are potential banana pills and will fancy their chances on the road on final day. The Foxes will be involved in two of their most difficult tasks of the campaign, with the Bredan Rodgers' team making a trip to Jose Mourinho's Tottenham Hotspur 19 July and hosting Manchester United at King Power Stadium seven days later. The former champions will likely garner two more points or lose both encounters, which will see them finish outside top four in the final standings. The Red Devils have been firing on all cylinders since the start of the second half of the campaign after their epileptic start.

They are undefeated in 19 games, but pegged 5th on the log inspite of their excellent run. After failing to capitalize on rivals' slip by picking a point in their last home game against Southampton, they will be looking to claim the scalp of West Ham United at Old Trafford on 22 July and fancy a win or at least a draw at Leicester City four days later.

Ole Gunnar Solksjaer is pleased with his charges after claiming maximum point at Crystal Palace and hopes they make the most of the opportunity.

“Yeah we need to smile, we need to go into this as in ‘we’ve earned this right’. No one thought this in January, that we were in with a shout for the top four and we’ve done fantastic since the restart and so we’ve got to smile, got to enjoy these games. These are the games that matter and that’s what it is at Man United, you need to step up and show your personality, " the Norwegian tactician was quoted as saying on the club's official website on Friday.

Solksjaer has little or no Injury concerns, Fernandes continues to pull the strings while Marcus Rasford and Anthony Martial are barely letting slip any scoring chances, with 17 Premier League goals apiece. They could possibly finish with 66 points and leapfrog Chelsea to third position due to a superior goal difference.