By Kelechionwudiwe (self media writer) | 3 years ago 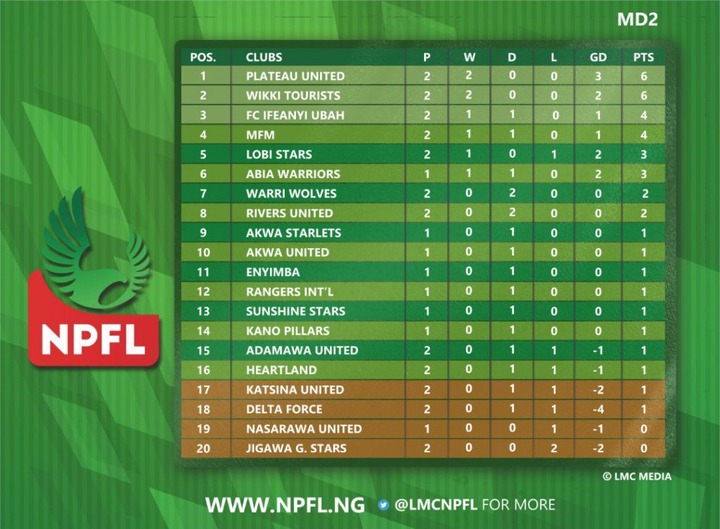 A top of the table clash in Jos, a battle of ex-champions in the north west, the Flying Antelopes tackle the Church Boys at the Cathedral and the record winners attempt to trample on the south south lords in the south east. It's the tale of the tape on match day three of the Nigeria Professional Football League this Sunday as full program of matches take center stage.

Here's my take on the fixtures.

This fixture pits familiar foes against each other at the Sani Abacha stadium in a tussle between the 13th placed Pillars and 8th placed Lobi. On paper, this looks like the match of the week based solely on the depth of top quality talent on both sides and the need to secure early bragging rights. 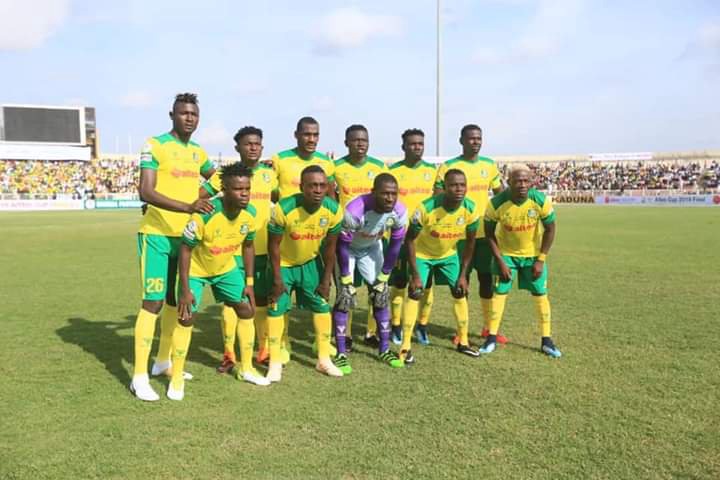 League runner up and domestic cup winners last term, Pillars didn't enjoy the best start after firing blanks in a scoreless draw at home to Rivers United on match day one and the rescheduling of their second fixture at promoted Akwa Starlets mean they find themselves in the lower half of the table.

Lobi Stars on the other hand find themselves five places better than their hosts after crushing Delta Force 4-0 on match day two, the biggest winning margin of the season so far, after slipping 1-3 at Plateau United on the opening day.

Pillars beat Lobi home and away last season and will definitely fancy their chances of a first home win this term. The absence of the suspended captain Rabiu Ali and the departure of long term hitman Gambo Mohammed will hurt but Nyima Nwagua is around and still knows his way to goal. For the visitors, the massive win on day two should get them in the mood and with two goals in two games, Super Eagles striker Sikiru Alimi should be closely watched by the Sai Mai Su Gida back four.

VERDICT:Pillars to win or draw.

United were fortunate to pick up their first points of the campaign at home to Rangers last weekend and will be looking to follow that up with a good road trip to the south south.

Wolves are back in the top flight for the first time in three years and two draws from their opening ties will boost expectations of home fans for a first win against a fellow promoted side.

Adamawa are many analysts' favorites to return to the lower division but if they can snag a few points early, maybe they can surprise their harshest critics.Some of the big names that made Wolves thick before their relegation three years ago are back in the oil city and should look ahead to a tough campaign with optimism.

Two unbeaten sides face off in Nnewi with the home side seeking a third good result in as many weeks. FCIU is sixth at the moment and may not be in awe of a United outfit which was extremely lucky to snatch a share of the spoils at home against Heartland on day two.

That said, the Port Harcourt side will always remain dangerous customers and coach Stanley Eguma, if he's bold enough to set out an attacking team for this game, could pick up another road point or better against a stubborn but very effective home side.

The Flying Antelopes are having a great season so far, four points from two games and passage to the group stage of the Caf Confederations Cup have seen them earn a place in the top five early on. It suggests too that after a third place finish in the abridged campaign last term, fans are certainly not ruling out another league title after the memorable 7th three years ago. 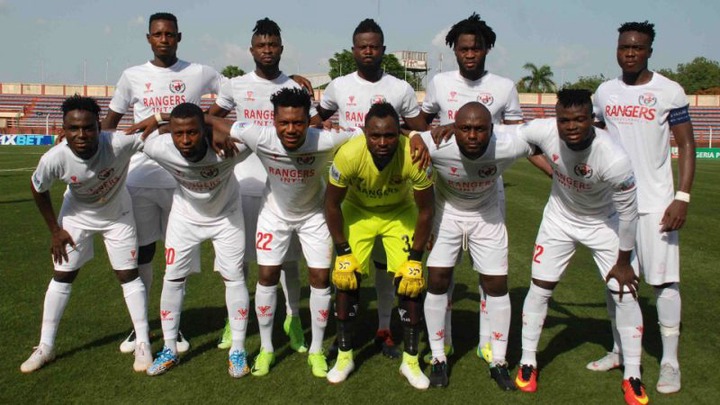 The Church Boys have also had an above average start to the campaign, splitting points at home against FC Ifeanyi Uba after a fine road win at Heartland on the opening day. Kabiru Adeniji is back in business upfront after notching his first of the season last week and will trouble the Rangers back line.

All the aces though are held by the super stars of the Coal City side who can turn any game their way in an instant. Osas Okoro has returned to Enugu from Buildcon of Zambia and his overlapping runs from the right back position will open up opportunities for the deadly front duo of Ifeanyi George and Nnamdi Egbujuo while youngster Ibrahim Olawoyin pulls the strings from behind.

A massive defeat in Makurdi last Sunday means home fans will expect an adequate response from Delta Force who are in their second season in the top flight and a first 38 fixture campaign. Jigawa Stars are joint bottom after two straight losses and a conservative approach to the last transfer window means squad depth is shallow and the promoted side is guaranteed a brutal battle if they are to remain in the NPFL beyond this season.

This is a top of the table clash that will see one of the two northern giants drop points after a 100 percent start to the season.

Abdu Maikaba is now settled at United after the distractions of national team duties over the past year and will look to talisman Amos Gyang to lead the charge again against their neighbours whose goal hopes depend on the in form Idris Guda Mohammed.

It's certain to be a feisty encounter in Jos and don't rule out a stalemate because these two are in rude health right now.

It might be early days yet but this tie at the 'Karkanda' is a relegation tussle between two of the bottom three. Bookmakers believe these two should be able to do enough to remain in the NPFL by the end of this season but a tally of one point between both sides this early has raised eyebrows.

Dami Paul is away with the Super Sand Eagles at the FIFA Beach Football World Cup in Paraguay and won't be in goal for this game though old war horse Gambo Mohammed will be seeking his first goal for his new club.The tie may have come too fast too for last season's top scorer Sunusi Ibrahim who is due to rejoin the visitors after Nigeria's group stage elimination at the under 23 African Cup of Nations in Egypt.

Expect a ferocious battle that won't be decided by a lot of goals.

The champions face a United outfit that are yet to win or lose this term but that always offer the stiffest resistance in Aba. In fact, the People's Elephants, despite all their succeses, have only had a couple of home wins over the Promise Keepers in their head to head history. 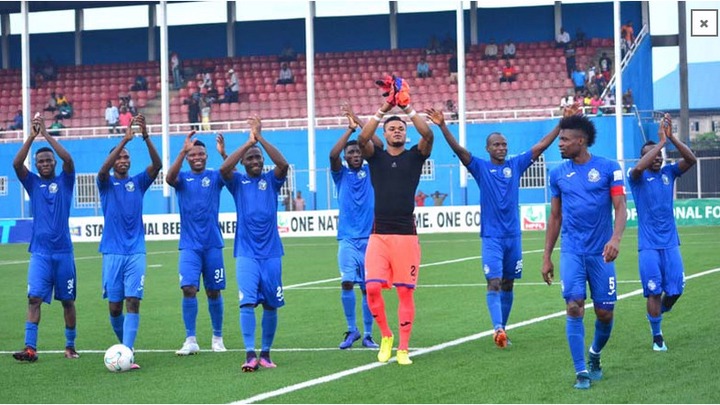 Both spent heavily in the off season and this will be the first major test for the record holders and should be a pointer to the visitors' genuineness or otherwise as they seek a first league title .

League joint top scorer last season Mfon Udoh returns to Aba for the first time since he left last year after five years at Enyimba and he definitely will be closely watched by the home team's back four which will be missing captain Ifeanyi Anaemena who is away on international duty with the Super Eagles.

Home supporters fully expect a first win of the season after a shock home defeat to Mfm on day one and a cruel last gasp penalty which denied the five time champions in Port Harcourt last Sunday.

Against promoted Starlets, newly signed hitman Christian Pyagbara will look to add to his strike last Sunday and coach Fidelis Ilechukwu will urge his team to abandon their rather conservative attacking approach and go all out to overrun the visitors.

Starlets are in the top flight for the first time in their history and their first top flight game yielded a 1-1 draw in Asaba. If they can leave Okigwe with a similar result or better, it would be seen largely as mission accomplished.

The Warriors say they are targeting a first continental ticket in their sixth straight top flight season and have started very well, thrashing Katsina United 2-0 on the opening day and drawing goalless at Akwa Utd in midweek.

Contrastingly, Sunshine could only draw against Warri Wolves and were dimmed in Enugu last Thursday so the pressure is on to put up a good performance in Umuahia that will return the confidence to the Akure outfit.

League joint top scorer Jimoh Oni will be looking to add to his tally today in front of newly reappointed club chairman Emeka Inyama. Still, Sunshine may have a surprise in store despite recent troubles.

Content created and supplied by: Kelechionwudiwe (via Opera News )