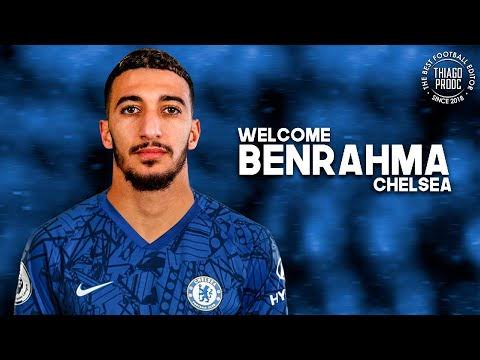 Chelsea boss Frank Lampard has been linked with a move for Benrahma.

Ollie Watkins believes his Brentford team-mate Said Benrahma can establish himself as a goalscorer as well as a creative player.

Watkins and Benrahma have been part of the Bees’ ‘BMW’ attacking trio, which also includes Bryan Mbeumo.

Watkins took his goal tally for the season to 25 when he scored the winner against Preston on Wednesday.

Benrahma, who is reportedly a target for Chelsea, has been in excellent goalscoring form himself recently.

And that has come as no surprise to Watkins, who believes the Algerian is capable of getting more goals.

Watkins told West London Sport: “Said’s unbelievable. Since we’ve been back he’s scored a lot of goals and I’m not surprised.

“I was surprised when he didn’t score, because I feel like he’s capable of scoring 20+ goals in this league.

Watkins and Benrahma have been too hot for Championship defenders to handle, leaving the Bees in with a chance of automatic promotion with just two games of the regular season left.

But Watkins insisted: “I still feel like there’s more for us to give.

“I say to Said a lot of the time that I still feel we can do more. We can still create more and score more.” Will Chelsea complete a deal for Kai Havertz this summer?

It is the big question on Blues supporters' lips, with the young German forward continuously linked with a move to Stamford Bridge.

The 21-year-old is quickly becoming one of the most talked about young talents in European football.

With that in mind, here is a round-up of all the very latest news on Chelsea's pursuit of the German star and what we know so far.

With plenty of speculation gathering about the 20-year-old's future, our sister title - The Manchester Evening News - report that the attacking-midfielder, who has netted 15 goals in all competitions for Leverkusen this term, is 'open' to the idea of sealing a switch to the Premier League in the next transfer window.

That news will come as a significant boost to both Chelsea and United, as both clubs continue to fight it out to land his signature.

Havertz is currently happy at Leverkusen and has no immediate desires to force an exit from the BayArena, but he would not be fazed by the prospect of sealing a move abroad and testing himself in the Premier League.

Six attributes that could make Havertz the ideal signing for Chelsea

Chelsea may have already secured the signing of Ajax sensation Hakim Ziyech for next season but you can never have too much quality, right?

If the Blues were to win the race for the midfielder, who would have had ambitions to represent Germany at this summer's European Championships had they not been suspended because of the coronavirus pandemic, he would add an extra wealth of quality to Lampard's options.

And that is an opinion held by Leverkusen assistant boss Marcel Daum, who has outlined the midfielder's qualities.

He told talkSPORT: "If you see his movement, he’s very elegant, he’s always calm, he has great passing ability. What a lot of people don’t see, because we watch him every day, is that he’s pretty fast. That’s a big bonus.

Chelsea told how much it will cost to complete deal

Chelsea would be able to secure Havertz's signature if they paid north of £90million.

That is according to Bayer Leverkusen boss Peter Bosz.

Chelsea looking to sign this 24 Y/O who’s been linked with a move to Spurs? Chelsea have been linked with Jan Oblak in recent weeks but the Blues might have to shift their focus to Andre Onana, a transfer target for Tottenham Hotspur.

Diego Simeone has made it clear that Oblak is one of his best players and will remain at Atletico Madrid for the upcoming season which is a bit of a setback for Frank Lampard.

“It does not surprise me, every year our most important players are wanted by the best in the world,” the Atletico boss told the media, as per Goal.

“It is normal to always look for the best – and we have many. Some have left and others have stayed.

“It is logical and normal that anyone wants Oblak. He is our captain and an important player. I hope we can count on his work, which is enormous for Atleti.”

And now with the possible move for Jan Oblak fading away it looks like Chelsea have shifted their focus to the Ajax shot-stopper.

The Spurs Web quote The Athletic saying: “According to a report by The Athletic, Chelsea have been in regular contact with rumoured Spurs target Andre Onana over a potential summer move to Stamford Bridge.

“The Athletic claim that the Blues could step up their interest in Onana, with the club said to be keen on finding a replacement for the error-prone Kepa Arrizabalaga this summer.”

Will Andre Onana be the right fit at Chelsea?

This is really bad news for Jose Mourinho who is reportedly targeting Andre Onana as the long-term replacement for Hugo Lloris and with Chelsea coming into the picture, it does not look good for Spurs.

The keeper will be allowed to leave if Ajax are paid the right transfer price in the summer and right now, Chelsea do have the money to spare.

Onana is not the only player who is being eyed by Lampard but the former Barcelona man will be available for around €30 million in the summer which makes him a real lucrative buy for both the London clubs.

Read: Chelsea might not be able to get their hands on this 27 Y/O keeper.

Read: Is 24 Y/O really capable of being Chelsea’s new No 1 or will he join another club?

Read: Chelsea planning to make a move for this keeper & it’s great news for one club.

Read: Why losing to Sheffield might not have been a bad result for Chelsea.