Man of the people: reasons why everybody loves Ngolo Kante N'golo Kante joined chelsea in july 2016 from leicester city when he helped them win the premier league. He won the same the following year with chelsea, again playing a vital role in the chelsea midfield. So yo mark this special day here are some reasons why N'golo Kante is being loved by everyone.

N'golo Kante always has time for his fans, such a gentleman right? An experience shared by a chelsea supporter shows just how much Kante cared for his fans. 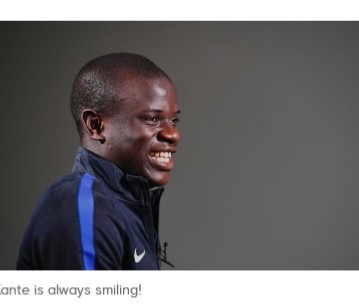 Well the most obvious thing about N'golo Kante whenever you see him is that he's always smiling. He has this beaming smile, that never leaves his face. That can also be seen when he plays football. The smile is attached to his face which shows just how much he's enjoying his football. N'golo Kante has been well written of but the list just keeps on growing. After missing his Eurostar back to Paris, N'golo was seen going back to the house of a gentleman he had just met at a local mosque to have food and play FIFA-even watching himself on match of the day later on.

When you arrive at Cobham you can see the array of Range Rovers and Bentley's in the training ground car park, yet N'golo favoured a more modest white mini for the first few years of his time as a blue. in recent years N'golo has been the Cobham pool competition champion, smiling his way to the final and beating all those who his way before lifting the trophy N'golo's stats are quite simply breathtaking . He has a machine-like level of stamina and endurance and goes about his work with minimal fuss. So here is just a little of the work he puts in...

During the 2017/2018 season he made 85 interceptions, the most of any player in the premier league. Another interesting stat is the fact that it took him only 72 matches to reach a half-century of premier league wins. He had only lost 8 times by the time he reached that figure. 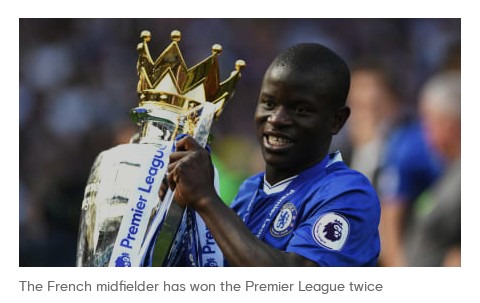 6 What the people are realy saying about him A whole lot of memes has been created about Kante's tireless work rate on social media, as well as some fantastic quotes about the French midfielder.

Claudio Ranieri, who was once a chelsea manager and who managed Kante during leicesre city's title-winning 2016 season once said , 'the referee counts up our team before each game and thinks he has 11 players, but with Kante we really have 12! Craig Shakespeare, the man who replaced Ranieri at leicester commented that the foxes used now Danny Drinkwater and 'Kante either side of him ', such was the distance of our No. 7.

Even formal blues defender Marcel Desailly was not left out as he also said 71% of the earth is covered by water, the remmaing 29% is covered by N'golo Kante! May be slightly hyperbolic, but the message is clear: N'golo's work rate is almost not human.

Over all, N'golo Kante has proven to be "MAN OF THE PEOPLE"

Content created and supplied by: Dave234 (via Opera News )