By NigeriaPrince (self media writer) | 1 year ago

Samuel Chukwueze assists in Villarreal's win over Dynamo Kyiv was enough yesterday to see the Yellow Submarine reach last of eight in the Uefa Europa league. Chukwueze who plays for 71 minutes before he was substituted, assisted Gerard Moreno at the 13th minutes to put the Laliga giant ahead.

Moreno bagged a brace at the 36th minutes of the encounter as Villarreal recorded 2-0 victory of their stubborn rival. Olayinka who was assisted by Jan Boril scored the goal after 14th minutes of play.

Another Nigerian Iyayi Atiemwen was in action and assisted in Dinamo Zagreb's win over Mourinho side, Tothenham Spurs. Atiemwen started his youth career at Bendel Insurance F.C. before moving to Kayseri Erciyesspor in 2016.

After two years of unsuccessful spells in Turkey, he joined the Croatian second-tier club HNK Gorica where he made immediate impact and with whom he won the 2017–18 Croatian Second League.

Gorica gained promotion to the 2018–19 Croatian First League where they were labeled as the biggest surprise of the mid-season, finishing 5th. At the end of the year, Atiemwen was ranked third among the 2018 Prva HNL Player of the Year awards.

On 22 January 2019, after spending a year at Gorica, Atiemwen signed a five-year contract with GNK Dinamo Zagreb. 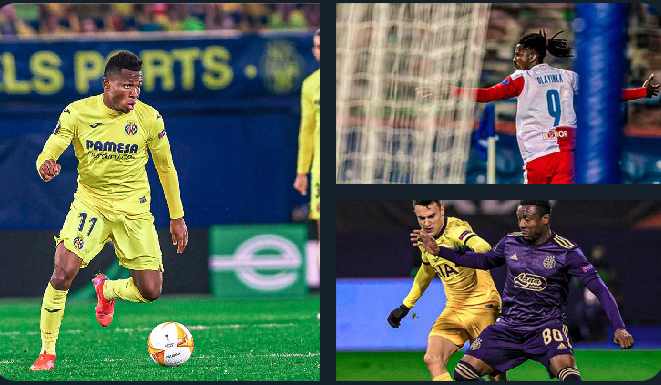 These three Nigeria representatives delivered a big shift to get their teams through to #UEL last eight.