Apparently, Arsenal failed to extend their 10-match unbeaten run at Anfield today, as Liverpool defeated them 4-0 with the likes of Mohamed Salah, Diogo Jota and Sadio Mane on the scoresheet. Of course, the Gunners played with a high level of winning spirit, but the Jurgen Klopp's men were too good up front. Without a doubt, Liverpool are better than Arsenal this season, as regards their all-around performances so far in the 2021-2022 campaign. However, there are two Arsenal players who are responsible for their 4-0 heavy defeat at Anfield, because they both failed to step up their games. The Gunners dazzled impressively in the first-half, but everything went sideways in the second-half.

Mikel Arteta used the formation of 4-4-1-1 because he wanted to subdue and attack Liverpool from the midfield, but these two players failed to play together with the team, and they literally overworked other players in the squad. Having seen Arsenal's performance against the Reds this evening, these two players should be blamed for their awful displays. 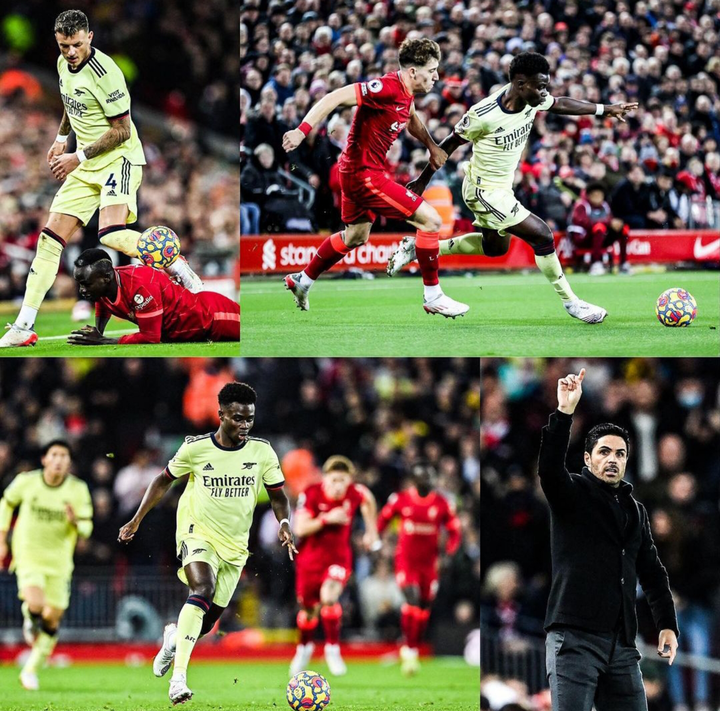 In all fairness, the English youngster was off the game at Anfield today, as he failed to connect with Aubameyang and Lacazette up front. Bukayo Saka played as a right-midfielder, but he lost ball possession 11 times, with 0 shots off target and on target. Mikel Arteta expected the Englishman to be offensive and defensive at the same time, but the player didn't contribute positively to the team's performance. Saka just completed one dribble throughout the 90 minutes, as he found it difficult to face Liverpool's Konstantinos Tsimikas in the right-wing position. Aside from that, the Gunners' young wizard won 1 out of 3 aerial duels and 3 out of 7 ground duels. The four-man midfield setup worked in their last match, with him and Smith Rowe playing wide up front. However, Bukayo was awful in performance at Anfield today, and he's somehow responsible for the Gunners' 4-0 defeat. The Japanese footballer was poor for the first time, since he joined Arsenal during last summer's transfer window. The Gunners' right-back was off and failed to handle Sadio Mane. As a defender, Takehiro Tomiyasu lost ball possession 17 times against Liverpool, and he literally gave the Senegalese enough space to rotate left and right, which is very bad for him. The Japanese baller had 1 error leading to a shot, and was dribbled past once, with 0 crosses and 0 long balls. Aside from that, Tomiyasu struggled in ground duels (1/6) and aerial duels (2/3). Without a doubt, Arsenal would have been able to accommodate Liverpool's pressure, if Takehiro had dazzled brilliantly from the right-back position. But, he was unable to handle Sadio Mane and Diogo Jota's threats.

What do you think of Arsenal's performance against Liverpool this evening?