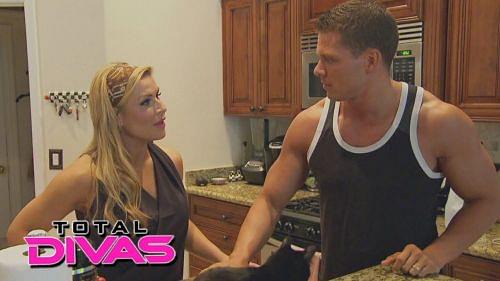 A few months ago, WWE Superstar Natalya posted a video of her husband and former WWE Superstar, Tyson Kidd, running the ropes. This fueled speculation that Kidd could be looking to come out of retirement and make a return to the squared circle.

Tyson Kidd was forced to retire after he suffered a career-ending injury during a dark match against Samoa Joe in 2015. The former WWE Tag Team Champion was injured when Joe botched his finishing move, The Muscle Buster.

Tyson Kidd, whose real name is TJ Wilson, currently works as a backstage producer in WWE. His wife Natalya has now provided an update on Kidd's neck and talked about the former WWE Tag Team Champion's role as a WWE producer.

Natalya provides an update on Tyson Kidd's neck; Opens up on his role as a backstage producer

On Table Talk w/ D-Von, Natalya revealed that Kidd's neck is in good condition. The Queen of Harts also talked about her husband's current position in WWE as a producer and said that she has a new-found respect for the job ever since Kidd took on the backstage role.

Good! It's really good! I probably worry about TJ's neck more than he does just because I'm very protective of him, and TJ is good. I mean, he's in a really, really good place. He absolutely loves being a producer in WWE. I've had a different appreciation for the producers because TJ is a producer. He's been a producer for a few years, and it is probably one of the hardest jobs, if not the hardest job, in the company because there's just so many things that I see that TJ has to do and balance. It's just a balancing act all day. So while we as the wrestlers, as the talent, we may be only focusing on one thing - our match - the producers have so many other thing that they're focusing on, and they're also producing multiple matches. They're dealing with multiple people. (H/T:  Wrestling Inc.)

While Natalya did say that her husband's neck is fine, she did not hint at a potential in-ring return for Tyson Kidd.