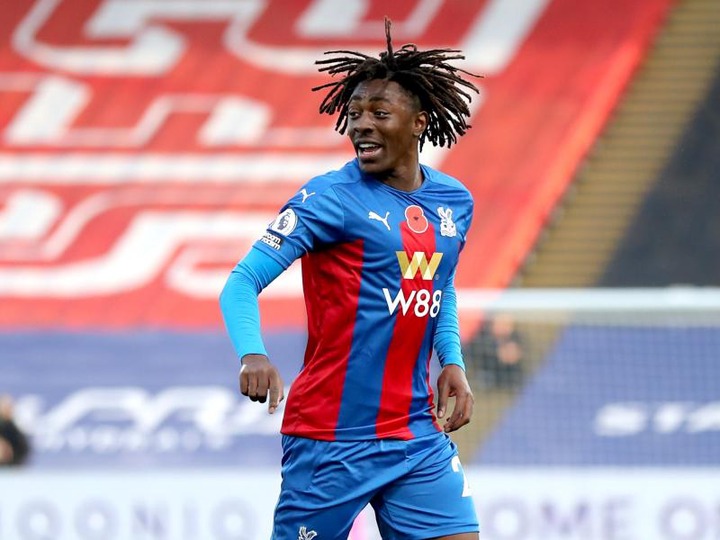 Crystal Palace of England midfielder, Ebrechi Eze pulled off a sensational display on Saturday, as he joined the array of Nigerian players with goals to their names across Europe, on a day Union Berlin of Germany striker, Taiwo Awoniyi also made hay. 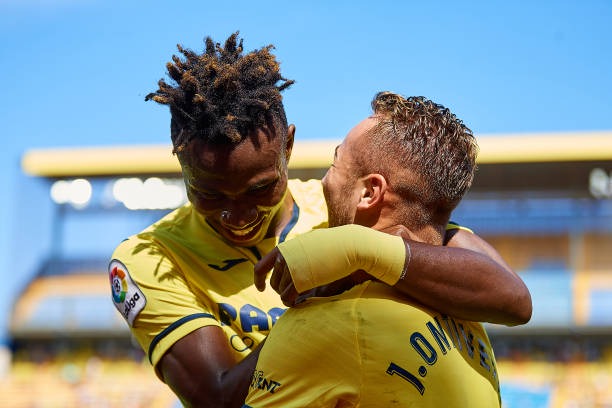 A total of four sizzlers came off the boots of Nigerian players on Saturday, while Villarreal of Spain winger, Samuel Chukwueze got an assist, as the foreign legion from Africa’s most populous nation started 2021 on a promising note.

The spree of goals was led by Awoniyi, who continued making waves in the German Bundesliga, after which Eze scored a wonder goal in the English Premier League, with Chuba Akpom and Uche Ikpeazu also both hitting target in the same English Championship match. 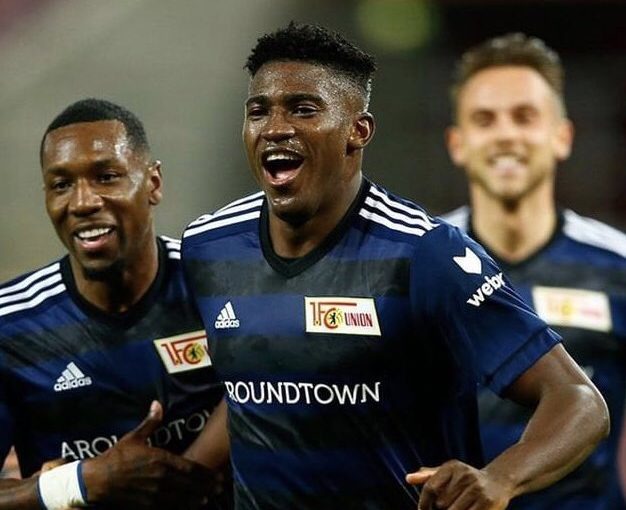 In Germany, Awoniyi scored his fifth goal of the season and provided an assist that helped Union Berlin win 2-0 away to Werder Bremen in a German Bundesliga fixture that was played at Wohninvest Weserstadion on Saturday.

Making his 130th appearance as a professional, the UAE 2013 FIFA U17 World Cup gold medalist, who is currently on loan from Liverpool of England, was involved in both goals scored by Union Berlin, providing the assist for the opener before netting the insurance goal. 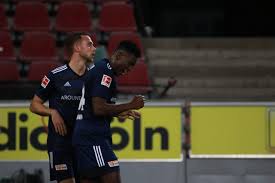 Twelve minutes in, Awoniyi set up Becker to striker and, four minutes later, he missed a chance to make it two when he shot over the bar, but the 23-year-old Nigerian striker then scored his first goal of 2021 on 28 minutes.

Awoniyi is now enjoying his most prolific time in the Bundesliga, as he could only manage a single league goal last season at SV Mainz 05, and he has this term helped Union Berlin up to fourth place on the table with 24 points from 14 matches. 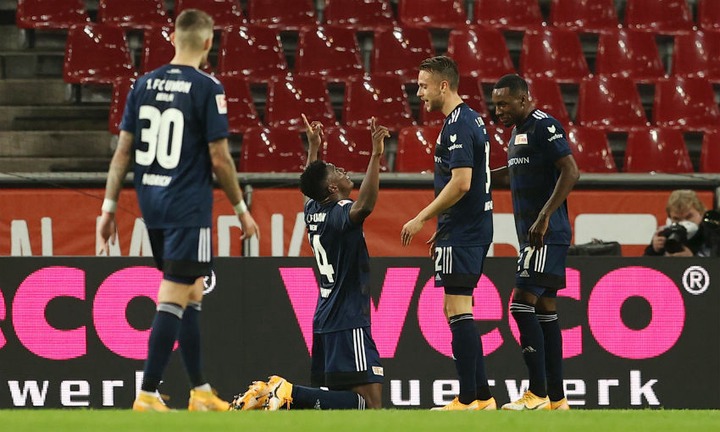 In Spain, Chukwueze provided an assist that helped Villarreal snatch a 2-1 win over visiting Levante, but he failed to score despite putting up spirited efforts in Saturday’s Spanish LaLiga game at Estadio de la Ceramica.

The fleet-footed forward came off the bench to make a meaningful impact for the Yellow Submarine and help them return to winning ways after playing out a draw against Athletic Club and losing to Sevilla. 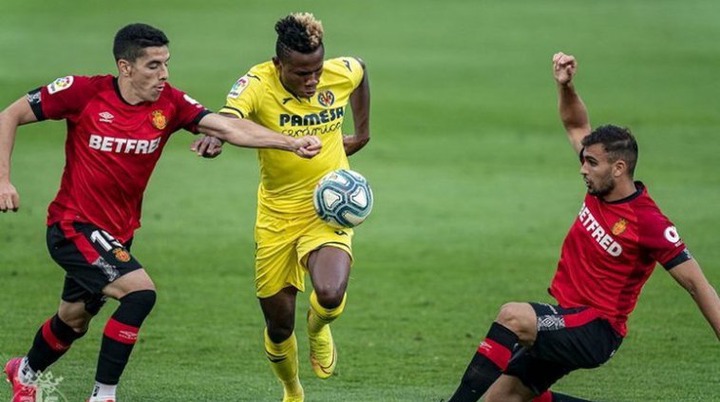 Unai Emery’s men started the game well, dominating proceedings and were rewarded for their effort when Fer Nino opened the scoring, as he tapped home the ball from close range after receiving a fine assist from Alfonso Pedraza in the 19th minute of the encounter.

Chukwueze was introduced for Yeremi Pino in the 46th minute and he made an immediate impact when he set up Gerard Moreno to double The Yellow Submarine’s lead eight minutes after he was brought on. 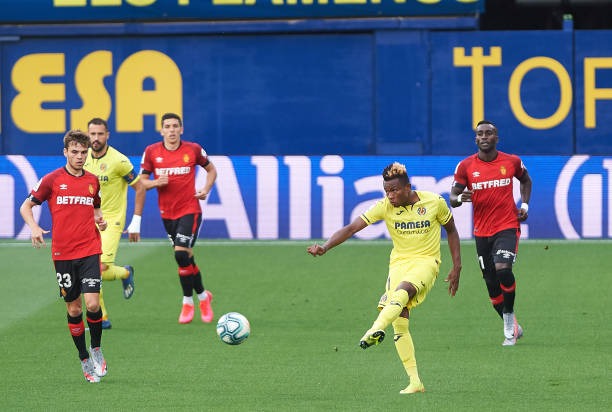 The Diamond Football Academy of Umuahia product then continued to impress on the wing and came close to hitting the net in the encounter, as he fired a powerful shot which Levante's goalkeeper, Aitor barely managed to parry.

In Scotland, Glasgow Rangers of Scotland duo, Leon Aderemi Balogun and Joe Aribo but got six points out of ten for their efforts in a dramatic victory for their side on Saturday, as The Gers' current top form saw them sink their city rivals, Celtic in the Old Firm Derby. 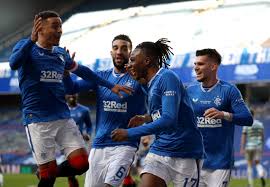 While Awoniyi scored his fifth goal of the season for Union Berlin, Balogun and Aribo were both on from the start and put in battling efforts at both ends, but it was an own goal that gave their side maximum points on the evening in Glasgow.

While Balogun went on to get full duration action in the encounter, Aribo was replaced by Brandon Barker on the dot of 90 minutes, as The Gers moved 19 points clear at the Scottish Premiership summit, after Callum McGregor put the ball into Celtics’ net, following Nir Bitton's dismissal. 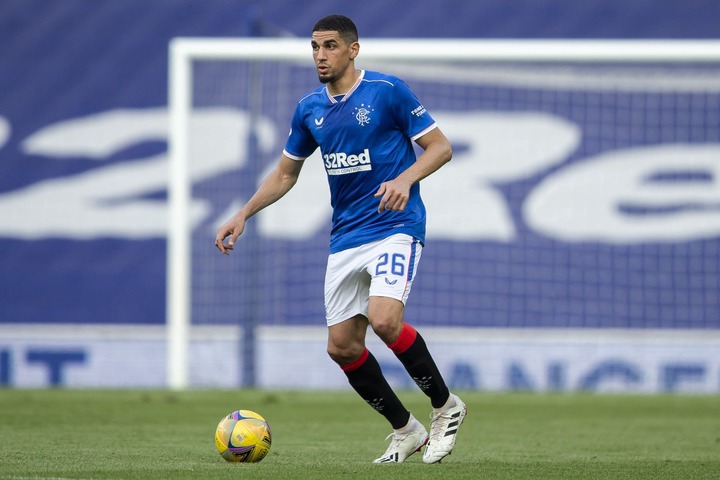 Three minutes later, a poor headed clearance by Balogun was intercepted by David Turnbull, whose cross was swept towards goal by Leigh Griffiths and McGregor was once again drawn into action, tipping over the rising shot.

Celtic had won five of their previous seven visits to Ibrox, and the defending champions continued to ask more questions as McGregor watched his shot whistle past the post. Rangers were struggling to impose themselves against the high energy of Lennon's men, with Alfredo Morelos failing to connect with Aribo's low cross. 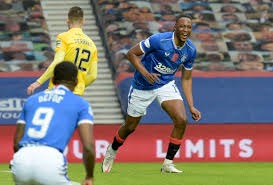 There would be no late drama as Rangers moved 19 points clear at the top of the Scottish Premiership, although second-placed Celtic still have three games in hand, but the Nigerian duo and their pals held firmly till the final whistle.

Balogun got six points on the analysts’ cards, and a citation in his favour read: "Magnificent block on Edouard's second-half shot at 0-0 atoned for an earlier error to present a chance to Griffiths as he eased into the game.” 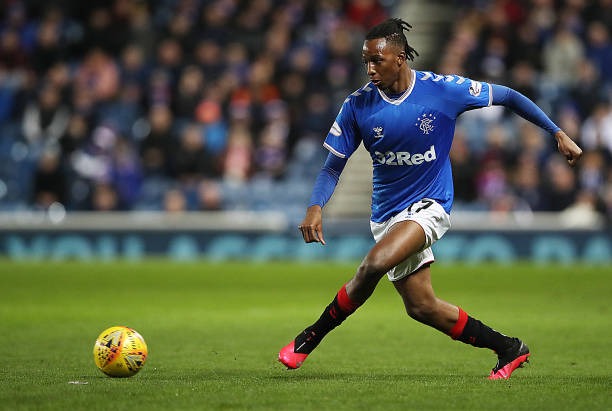 Aribo’s rating was also six, and his review stated: "Found Morelos with a fine cross for Rangers' only chance of the opening 45 minutes. This didn't feel like the midfielder's game but he never shirked responsibilities before he was withdrawn late on."

In England, Crystal Palace playmaker, Eberechi Eze got a shower of superlatives on Saturday, following his remarkable goal in the English Premier League, while Chuba Akpom was also on song for Middlesbrough in the lower division, English Championship. 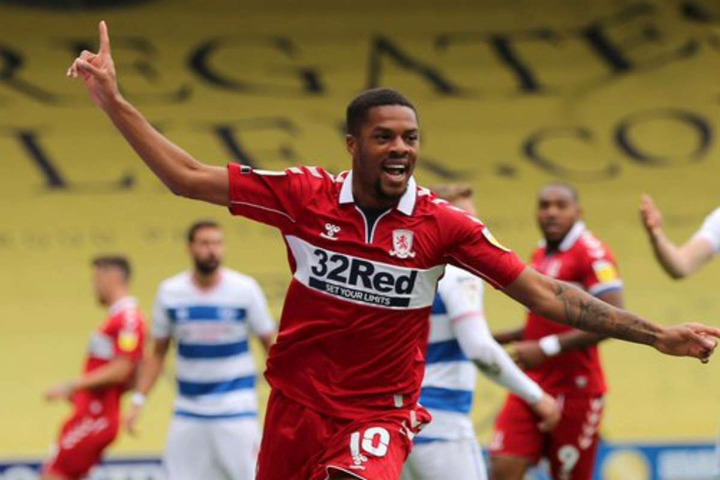 Akpom's goal helped Middlesbrough win their first game of 2021, but they had to storm back from behind to defeat Wycombe Wanderers 3-1 in a game that also saw Uche Ikpeazu start for the losing home side, for which Dennis Adeniran, Fred Onyedinma and Adebayo Akinfenwa entered as second half substitutes.

Ikpeazu gave Wycombe a dream start after bending a shot into the far corner in the third minute before Marcus Browne leveled things up in the 30th minute, but nine minutes before half time, Marcus Tavernier drilled home to make it 2-1 after he was teed up by Akpom. 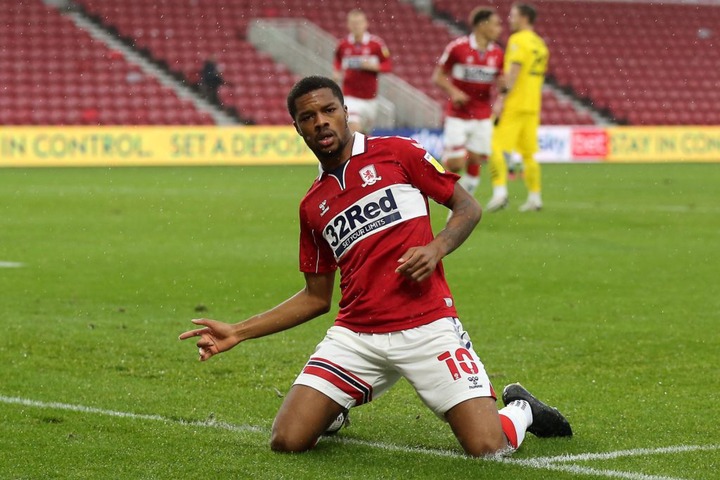 Akpom then turned from provider to scorer in the 81st minute as he scrambled the ball in from a corner kick by McNair, helping the Nigerian-born lad take his haul to four goals with one assist in 19 league games since joining Boro from PAOK Saloniki of Greece in September.

A day after Alex Iwobi was left out of the Everton squad that lost at home against West Ham United, Eze was in action with another London-based club and wowed everyone watching, with former Chelsea midfielder, Steve Sidwell stating that the youngster replicated the type of goal Arsenal's all-time top scorer, Thierry Henry would get for The Gunners. 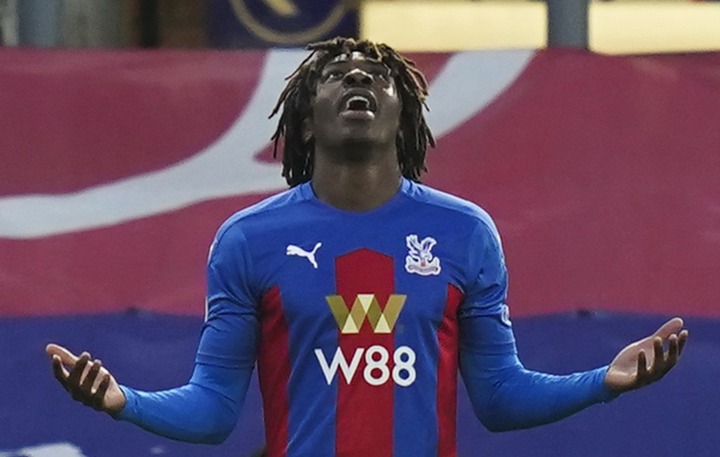 Such was the high level of amazement, as Eze's sensational solo goal helped Crystal Palace ease past Sheffield United 2-0 as Chris Wilder's side made it a record-breaking 17 Premier League games without a win from the start of the season.

The visitors made the worst possible start when falling behind to Jeff Schlupp's deflected strike after just four minutes at Selhurst Park, and The Eagles doubled their lead with Eze's individual effort in first-half stoppage time as the substitute beat three players with his run midway inside his own half, before finding the bottom corner. 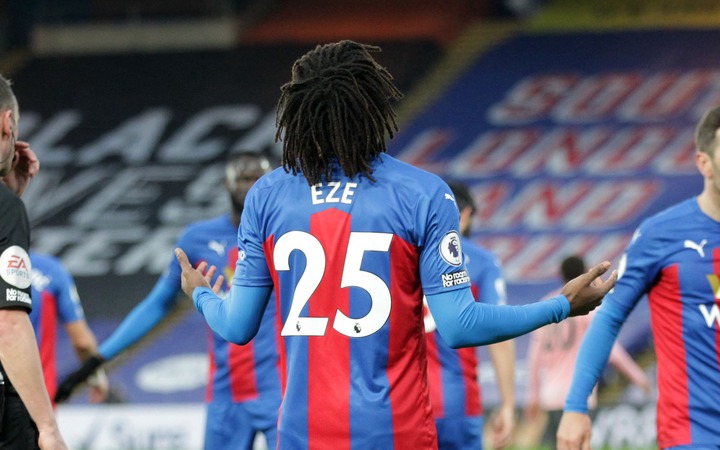 Eze, who had replaced the injured Schlupp five minutes before half-time, picked up possession midway inside his own half, before embarking on a mesmerizing solo run that took him past three opponents, before coolly finding the bottom corner from the edge of the box.

Both of Eze's EPL goals for Palace have come from outside the box, with only James Ward-Prowse (3) netting more from long range this season, and he is only behind Southampton midfield ace, James Ward-Prowse, who has scored more goals (three) than any other player outside the opposition area in the ongoing campaign. 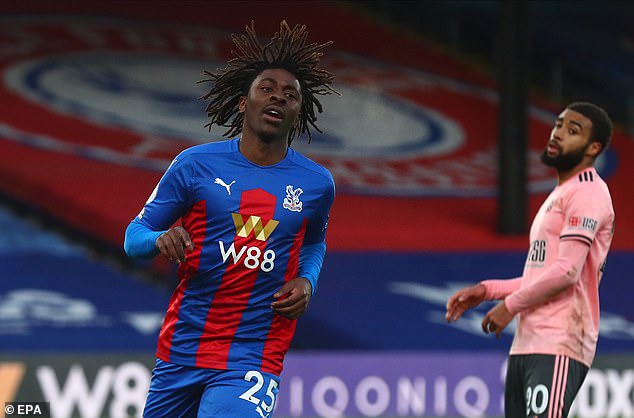 Eze’s performance against The Blades was a display of marvelous quality and the youngster, who opened his EPL account for Palace with a sublime free-kick in a 4-1 spanking of Leeds United in November, confessed that he is excited with how things are turning out for him.

The England youth international has been an instant hit in Hodgson’s squad since joining them from English Championship side Queens Park Rangers on August 28 on a five-year deal; for a fee reportedly around £17m. 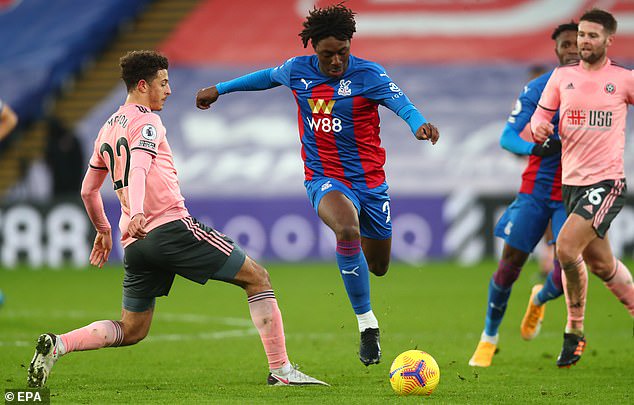 Eze told Sky Sports: “Potentially. I know it’s a good goal. I’m grateful for the opportunity to come on, and to take my chance which was great. 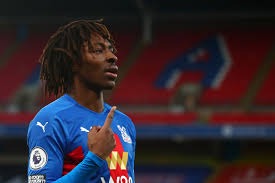 “You want to come on and make an impact and be effective. I thought I may as well take the chance and see if I can beat someone, and thankfully it went in.”