The rumors were indeed true. The Good Brothers have officially signed with Impact Wrestling. 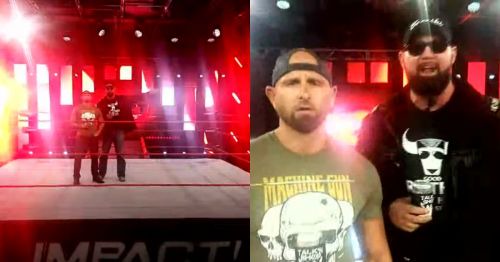 Gallows and Anderson were also shown inside the Impact Wrestling ring. Gallows revealed that they would be live at Slammiversary later tonight.

Here's what Gallows and Anderson revealed on the podcast:

Gallows: I think the most important thing right now is that the fact that we are live and the countdown has expired. And the rumors are true, the internet buzz was correct, we have officially signed with Impact Wrestling. It's midnight, we're live, and we're going to be live on PPV tonight for Slammiversary. It's good brother time baby.

The Good Brothers are now in Impact Wrestling

Pro Wrestling Sheet's Ryan Satin had first revealed that Impact Wrestling were heavily pushing to get Gallows and Anderson on board.

Sportskeeda's Gary Cassidy confirmed on June 30th that Gallows and Anderson to Impact Wrestling was a done deal.

I've been told Luke Gallows and Karl Anderson to IMPACT Wrestling IS a done deal. The pair will debut in July, either at Slammiversary or shortly after, in line with the terms of their WWE non-compete clause. The deal allows the former WWE Tag Team Champions to work with NJPW.

The report over the weekend, which came from @ryansatin, also revealed how "TalkNShopAMania" - Gallows and Anderson's video podcast - may start off as a side promotion, which is something I've also been told content has been recorded for.

The Slammiversary PPV is set to feature a few more debuts or returns of recently released WWE Superstars, and there is a considerable amount of hype attached to the show. The Good Brothers have already signed up, but who's next? Let us know your predictions in the comments section.