The latest edition of the official Manchester United Podcast is out this evening, with the latest guest being the legendary Jim Ryan. 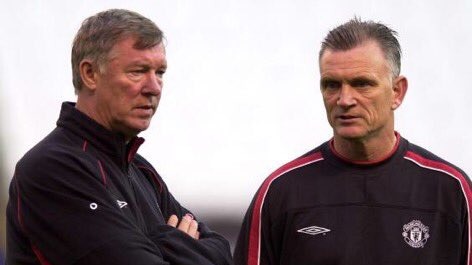 As a former acadamy graduate himself, Ryan talks about the best youth player he has seen, plus his thoughts on Paul Pogba before he signed for United's academy.

Below is a little taster of what you can expect to hear tonight:

“I was with the ex-Aberdeen player, who was the coach at Wolves (Mark McGhee), and George Graham. We were together in the same hotel and went to the game together. I was supposed to look at Ronnie (Johnsen) and weigh him up.

“So I went to the game and watched Ronnie. It was too easy for Ronnie. They ended up winning 5-1 or something.

“Once my eyes had adjusted to watching a school boy play in the game (laughs), which was what Ole looked like to me. He looked like a 15 year old. I’m sitting next to Mark McGhee who keeps telling me, ‘I need a centre forward. I’m desperate for a goalscorer’. He was at Wolves then. And as the game goes on I’m thinking, ‘He’ll be watching this lad now’. I think he scored two goals plus hit the bar and all the rest of it, the typical things you see, that makes you think, ‘This guy’s a goalscorer’.

“So we went and had something to eat and then we came home the next day. And all the way back I’m thinking, ‘I better do something about this.”

“So I came back and I couldn’t get a hold of Les, Les Kershaw is the one I normally spoke to when I had seen a player. He was in Portugal. There was no one here except the manager but I thought, ‘I don’t want to disturb him’, it was a Sunday. But it’s bugging me all the time. I thinking, ‘Wolves will be speaking to him or one of the German teams that were there’. Eventually I just thought, ‘I’ll just phone the manager’. So I phoned him up.

“He said, ‘What about Johnsen, what do you think?’ I said, ‘Yeah, he looks alright but they have got a young centre forward who looks a real goalscorer’. So I talked to him and talked to him and I told him what had happened. I said, ‘I’m worried that Mark McGhee is at the game, and he’s telling me he needs a centre forward so you might lose him’. He said, ‘OK, leave it with me’. I didn’t know he would do anything.

“Next thing I know we had signed him. I went to training, start of new season, first day and he’s there. Someone had told me we had signed him. Brian Kidd comes up to me and said, ‘You’ve done it now, haven’t you?’ I said, ‘What?’ He said, ‘You’ve signed a school boy’, because Ole looked like a little boy. I thought, ‘Oh, don’t tell me I’ve made a mistake’.

“Anyway, I don’t think it was a mistake in the end. He did alright, didn’t he?”

On the best youth player he has seen

“I think probably Scholesy, Scholsey is really tough and physical but it’s his skill that gets him most of the rewards. It’s the nice touch on the ball or it’s that he receives a pass nice or he makes the pass nice or he hammers it in from whatever distances. He’s a talent. That’s what I call talent.”

“I thought he was a certainty. He came to us in a funny way. We used to go every year to a tournament round Paris. It had international teams playing in it. So, you had to drive back and forward. You had to drive round the outskirts of Paris, find the ground, get in, get a teamsheet and just in time you could watch the game.”

“But you had to leave five mins before the end to get to the next one because they were dotted round (Paris). He was playing for one of those teams, he was playing for the French team just doing what he does.

You can listen to the rest of the interview from this evening, by searching for UTD Podcast on any of your favourite podcast providers. You can find previous episodes, and exclusive video clips of them being recorded, on the official Manchester United app and website.