Top 10 Arsenal Biggest Victories in The History of Premier League

The Gunners have been involved in high-scoring triumphs throughout the Premier League's history, with the Arsene Wenger era resulting in a groundbreaking brand of offensive play. Here's a look back at some of Arsenal's biggest victories in the Premier League era, whether they were against the best teams the club has ever produced or even near the conclusion of the French manager's rule. 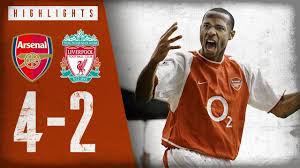 The treble-chasing Gunners had just been dumped out of the FA Cup semi-final and the Champions League quarter-final in a matter of days, so a visit from Liverpool on Good Friday might have been disastrous as they attempted to close in on the Premier League title. Arsenal's chances looked bleak after Sami Hyypia headed Liverpool ahead after just five minutes. On the half-hour mark, Thierry Henry equalized, before Michael Owen and Steven Gerrard combined to give Liverpool a 2-1 lead just before half-time. With their unbeaten record in jeopardy and their season on the verge of collapse, Wenger's team came out in the second half and turned things around. Four minutes after the break, Robert Pires stabbed home an equalize, before Henry put Arsenal ahead with a magnificent half-way line dribble, leaving a trail of Liverpool defenders in his wake and shooting neatly into the right-hand corner. With 12 minutes remaining, Henry completed his hat-trick, maintaining Arsenal's unbeaten record and pushing them seven points clear at the top of the table. 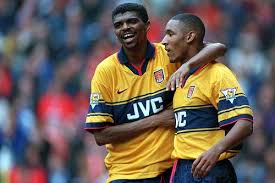 Arsenal's Marc Overmars in action during an FA Carling Premiership match versus Middlesbrough at the Riverside Stadium in Middlesbrough, England, on April 24, 1999. Arsenal won the match with a resounding 1-6 victory. In April 1999, an outstanding Arsenal performance completely thrashed Middlesbrough and helped the Gunners achieve the Premier League summit. After Marc Overmars opened the scoring with a fourth-minute penalty, Nwankwo Kanu and Nicolas Anelka both scored twice, while Patrick Vieira scored shortly before the hour mark. In the 87th minute, Boro's Alun Armstrong scored a consolation goal, but the damage had already been done. 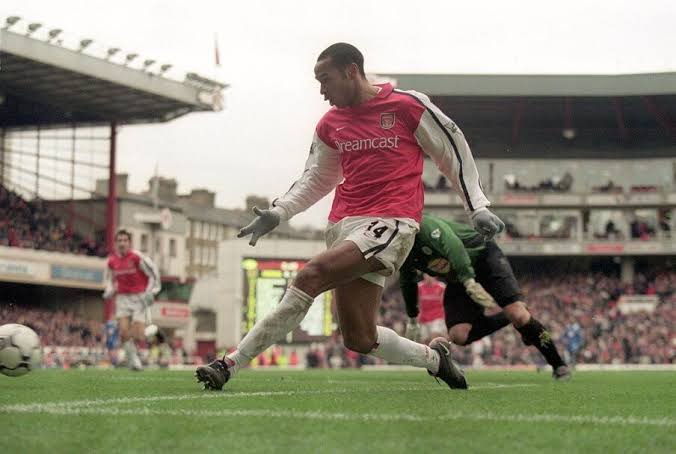 Tony Adams celebrates his goal for Arsenal during the Premier League match between Arsenal and Leicester City at Highbury in London on December 26, 2000. The game ended in a 6-1 victory for Arsenal. Arsene Wenger's team ran riot against the Foxes, with Thierry Henry scoring a hat trick in his 50th league game for the Gunners. Late in the first half, Henry broke the deadlock before Vieira netted his fifth goal of the season in this Boxing Day match. Ade Akinbiyi of Leicester pulled one back before strikes from Henry, Freddie Ljungberg, and Tony Adams delivered Gunners fans a late Christmas present. 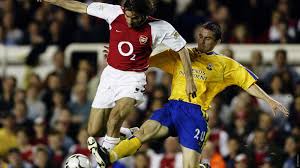 On May 7, 2003 in London, Arsenal's Thierry Henry rushes past Southampton's Danny Higginbotham at the end of the FA Barclaycard Premiership match between the two teams at Highbury. Jermaine Pennant scored a hat trick on his Premier League debut as the Gunners thrashed the Saints at Highbury. The match was essentially a warm-up for the FA Cup final between the two teams, and Arsenal made a strong statement ahead of their battle at Cardiff's Millennium Stadium. While Pennant was awarded the game ball, French winger Robert Pires also scored three goals, making it an uncommon occurrence for two players from the same side to score hat tricks in the same game. With the momentum on their side, the Gunners went on to win the FA Cup thanks to a Pires goal. 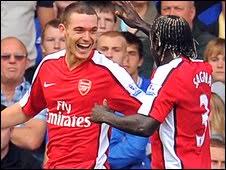 Arsenal has been granted naturalization. After scoring Arsenal's sixth goal in the English Premier League football match between Everton and Arsenal at Goodison Park in Liverpool, north-west England on August 15, 2009, Croatian striker Eduardo da Silva (L) celebrates with Ivorian defender Emmanuel Eboue (R). Arsenal thrashed Everton in a spectacular performance of aggressive football on the first day of the 2009/10 season at Goodison Park. Summer signing Thomas Vermaelen added to the Gunners' lead after Denilson started the scoring with a superb 25-yard curler. Arsene Wenger's side led 6-0 away from home after William Gallas made it 3-0 with a brace from Cesc Fabregas and a late Eduardo tap-in. The Gunners' spirits were not dampened by a consolation strike from Louis Saha, as they went on to finish third in the Premier League that season. 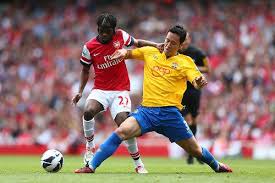 Arsenal's Kieran Gibbs and Gervinho celebrate after Southhampton's Nathaniel Clyne scored an own goal in the first half to make it 4-0 during the Barclays Premier League match between Arsenal and Southampton at Emirates Stadium on September 15, 2012 in London, England. Southampton had only recently returned to Premier League action when they were thrashed 6-1 at the Emirates Stadium, with Gervinho scoring a brace. Lukas Podolski blasted a 25-yard free kick into the top corner after an own goal by Jos Hooiveld. Gervinho scored his first goal, followed by another Nathaniel Clyne own goal. Southampton's Danny Fox pulled one back, but Gervinho's second and substitute Theo Walcott's sixth goals sealed an overwhelming triumph. 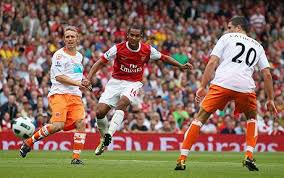 Arsenal's Theo Walcott scored his hat-trick goal during the Barclays Premier League match between Arsenal and Blackpool at The Emirates Stadium in London, England on August 21, 2010. Arsenal thrashed newly promoted Blackpool at the Emirates in the second game of the 2010/11 season, resulting in a humiliating defeat for the visitors. Theo Walcott scored his first hat trick for Arsenal, who also won thanks to a penalty from Andrey Arshavin and goals from Abou Diaby and Marouane Chamakh. Arsene Wenger felt his side could mount a strong title push after seeing his side score an amazing 6-0 win at Anfield on the opening day of the season. In February, the Gunners were just one point behind Manchester United, but a run of only one league win between March and April put an end to any chances of winning the Premier League. 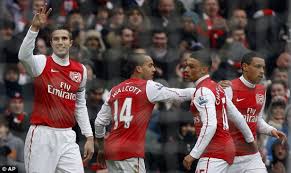 In London, England, during the Barclays Premier League match between Arsenal and Blackburn Rovers. In unquestionably his best season as an Arsenal player, captain and leader Robin van Persie scored a hat trick against Blackburn as the Gunners put on a flawless display at the Emirates Stadium. Before Blackburn's Morten Gamst Pedersen equalized with a free kick, the Dutchman had put the Gunners ahead. Arsene Wenger's side took a two-goal lead thanks to another Van Persie goal and a score from a youthful Alex Oxlade-Chamberlain. Following that, Mikel Arteta scored before another Oxlade-Chamberlain goal and Van Persie's third goal appeared to seal a 6-1 victory. Thierry Henry, despite his teammate's hat trick, would likely take home the majority of the attention, as the returning French star scored his first league goal for the Gunners since returning to the Emirates in the January window, capping off a fine 7-1 win. 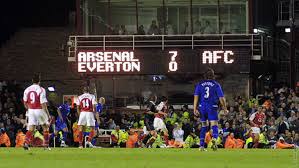 Arsenal displayed tremendous control in their final home game of the 2004-05 season. They finished second that season after scoring one of the all-time high scores of 7-0 against Everton. Everton, on the other hand, was awarded a place in the Champions League playoffs. 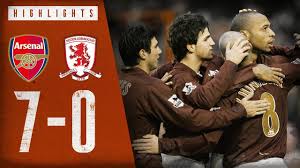 Thierry Henry equaled Cliff Bastin's Arsenal record of 150 league goals with a hat trick against Steve McClaren's side at Highbury, helping the Gunners crush ten-man Middlesbrough. Boro's sorrow was compounded by goals from Philippe Senderos, Robert Pires, Gilberto Silva, and Alexander Hleb, with the result serving as one of the highlights of Arsenal's final season at Highbury. While the Gunners would take comfort in pipping north London rivals Tottenham to the final Champions League spot by finishing fourth on the penultimate day, the campaign would conclude on a dismal note with a crushing 2-1 defeat to Barcelona in the Champions League.