Man United are set to Select Henderson Ahead of De Gea

David De Gea’s time at Manchester United might be up as the club turn to Dean Henderson.

The Spaniard’s career has been in decline for almost two years now. Since 2018, De Gea’s performances have barely been of standard all the while racking up mistakes. The shot-stopper now ranks joint-tenth on Premier League’s all-time most errors leading to goals chart, ranking joint-second this season. It’s no surprise that the former Atletico Madrid man’s dip in form is so apparent in statistical representation. Being the most highest paid goalkeeper in the world, these are not exactly excusable performances from him.

Which is why United are looking to bring back Henderson. The Red Devils are ready to call the 23-year-old back and offer him a starting role at the club. 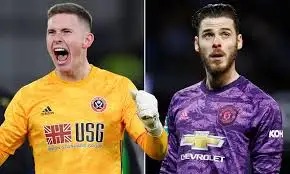 The Englishman was loaned to Sheffield United for the past two seasons, but this time around he’s proved to be a revelation. The Sheffield keeper quickly became one of the best shot-stoppers in the league, making his side one of the most defensively stable teams this season.

Moreover, the England U21 international is less prone to errors, better at ball distribution, and recorded more cleansheets than the United No. 1 in fewer appearances this campaign.

With all things considered, it wouldn’t be a surprise if the youngster became an instant starter at Old Trafford.

However, that’d put the Spanish international’s future up in the air as Ole Gunnar Solskjaer would likely prefer not to have a second-choice keeper on a £395,000-per-week contract. Especially since Sergio Romero has proven his reliability as a backup. It is unclear where the 29-year-old could depart to considering his astronomical wages, but as things stand the United loanee seems to have the favour of the important names in Manchester.