By Fedinando (self media writer) | 1 year ago 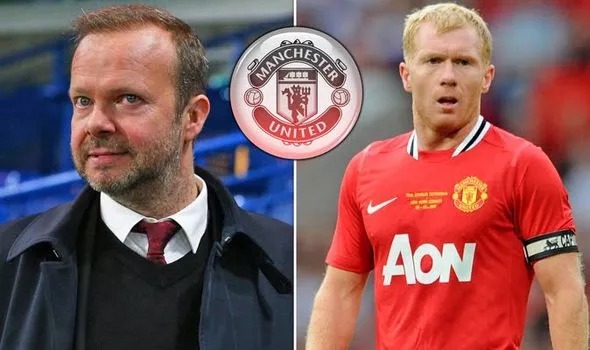 Manchester United chief Ed Woodward could be about to sign a player worthy of replacing Paul Scholes.

Manchester United Star Player Bruno Fernandes has been given Paul Scholes number 18 jersey number. Although his style of play is different from the United's legend pattern. They both have the same vision of goals and impressive passes sometimes he loses position.

As for Thiago Alcantara I'm not too sure about him, Moreover the Spanish international is about to secure a deal at Manchester United.

For years, Manchester United didn’t really need to invest in the middle of the park.

Scholes don't actually left Manchester United during his whole stay at Old Trafford and he was a loyal player for Sir Alex Ferguson as he makes his 718 appearances for the club and he won 11 Premier League title during his stay. He retired from the club in 2011, United then had no choice than to use only Tom Cleverley and Anderson but soon realised they weren't giving them want they wanted.

They have to call Scholes back from his retirement in January 2012 for just more 18 months and he helped Man U to beat Manchester City as champions the following year.

Immediately after that United moved over to signing Tiago as a replacement.

David Moyes was eyeing the Spain international but, in the end, wasn’t fully convinced.

Instead Moyes, went to Everton and signed Fellaini, with Woodward paying 27 million-euro for the Belgian player.

Thiago, however, has since made United regret that transfer decision.

Bayern Munich ended up bringing him to Germany from Barcelona on 2013 summer transfer window.

Although sometimes he finds it hard to keep fit but when he's been available he shows himself to be one of the most perfect player in the world.

He’s like Scholes in the sense that his passing ability is sensational, with the Spanish able to pick out a pass from distance.

And, like the United legend, he’s also capable of scoring goals from the edge of the box due to his ability to make the perfect run.

United really wants him because of his passing ability.

Thiago maintained a 90.2% pass success rate throughout the 2016–17 Bundesliga season, higher than any other player in Germany.

There are reports and rumours going on that united are getting close in signing Thiago Alcantara, Woodward and Solskjaer sees him as a perfect player for their squad.

Sports News also reported that Manchester United are ready to bring Thiago Alcantara to Old Trafford even though Liverpool have been there for him also.