Feuds That Can Start After NXT TakeOver: Vengeance Day

The recently-culminated NXT TakeOver: Vengeance Day is already being hailed by many as an all-time great pay-per-view. The show had five matches in total, with all of them delivering at one level or the other. The night opened with Dakota Kai and Raquel Gonzalez defeating Ember Moon and Shotzi Blackheart to win the first-ever Women's Dusty Rhodes Classic tournament.

Next, Johnny Gargano retained his NXT North American Championship against Kushida in a terrific bout. MSK won the Men's Dusty Rhodes Tag Team Classic after defeating Grizzled Young Veterans, who were the finalists in the previous year's tournament as well.

Io Shirai retained her NXT Women's Championship after defeating Toni Storm and Mercedes Martinez in a triple-threat match. In the main event of the night, Finn Balor came up victorious in his NXT Championship defense against Pete Dunne. The post-match development of Adam Cole turning heel on Balor and his Undisputed Era stablemate Kyle O'Reilly has gotten the fans buzzing.

Now with the PPV behind us, the time seems ripe to predict what storylines can we see on NXT programming in the coming weeks. So without any delays, here are five feuds that can start on the Black and Gold b 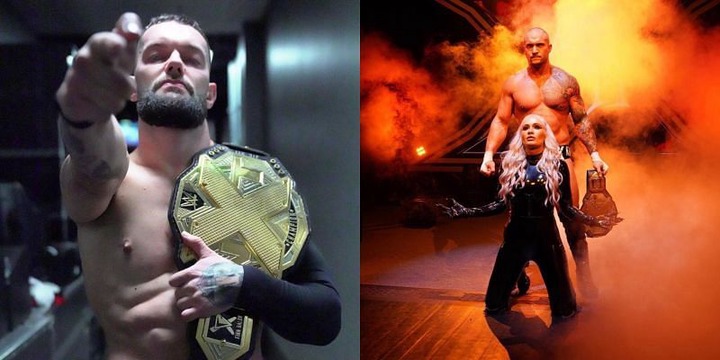 rand from this week onwards.

The ending of the match saw Shirai delivering a moonsault to Martinez just when Storm was gaining control. Shirai came up victorious after pinning Martinez, and Storm was protected. As a result, it makes narrative sense if Storm lays down a one-on-one challenge to Shirai for the title.The three-way match for the NXT Women's Championship that saw Io Shirai defending her title against Toni Storm and Mercedes Martinez ended with Shirai retaining her title. The bout was quite a fun affair, albeit a little disjointed at times. The three Superstars put in a lot of effort in the proceedings and came up with a couple of spectacular spots like the double submission lock and Shirai's double splash from ringside.

The two Superstars have terrific chemistry in the ring and can steal the show whenever they are pitted against each other. The NXT creative team might not wait until the next TakeOver special to book this match, and we may witness the two colliding for the title very near in the futurfu

With momentum on their side, it wouldn't come as a surprise if they lay down a challenge to NXT Tag Team Champions Oney Lorcan and Danny Burch. The champions have a much more mat-based, stiff, and submission-driven offense that can work well in contrast with MSK's high-flying style. Until recently, the tag division on NXT was suffering from a lack of legitimate teams. But with MSK in the mix now, the duo can very well take the division in a new direction.Considering  MSK  joined WWE NXT in December 2020, the two have achieved quite a lot in just three months with the company. The two debuted in the first-round match of the Men's Dusty Rhodes Tag Team Classic tournament, and today they stand on top of the mountain as the winners. The duo of Nash Carter and Wes Lee defeated Grizzled Young Veterans in a tremendous battle that was arguably the best NXT tag team match of the year so far.