By LeeJr (self meida writer) | 1 months 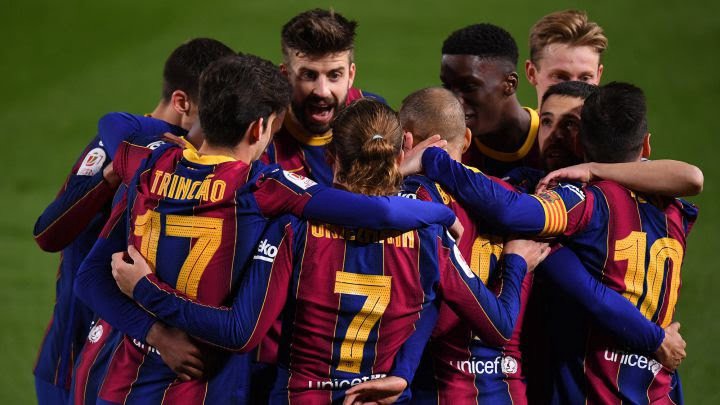 Fc Barcelona had a lot of work on their hands on Thursday as they went into their second-leg semi final fixture against Sevilla. The Blaugranas had lost the first leg 0-2 away from home and a far better performance was very necessary if they were to seal a final place in the competition.

Having defeated this same opponents the previous week in the Spanish la liga, Barca went into their all-important game with a bit more confidence and coordination than usual. As expected, this paid off for Ronald Koeman's men as they got their first goal just 12 minutes into the game. The pressure was maintained on their opponents for the rest of the first half but they failed to register a second up until the break.

The second half began in similar fashion but Barca came very close to losing it all in the 73rd minute when Sevilla were awarded a penalty thanks to Oscar Mingueza's foul on Lucas Ocampos. Ocampos stepped up for the spot kick, took it firmly but had it saved by Marc-Andre Ter Stegen. That re-instilled the Blaugranas' confidence as they began total domination and kept up the pressure from then on. They finally got rewarded in extra time when defender Gerard Pique headed in from close range. Pique's goal was good enough to send the game into extra time and put his team in a comfortable position with lots of confidence on their side.

The match winner finally came in extra time and this time, from substitute, Martin Braithwaite . He met Jordi Alba's cross beautifully and his glancing header from close range was just what Barca needed to seal a place in the finals where they'll face whoever emerges victorious in tomorrow's game between Levante and Athletic Bilbao.

Content created and supplied by: LeeJr (via Opera News )