Mikel Arteta's led Arsenal team have received boost in their squad ahead of the first leg of the UEFA Europa league quarter finals ties, against Jindrich Trpisovsky Slavia Prague side at the Emirates Stadium.

The North London club have been without the presence of England international, Bukayo Saka for weeks having been sidelined with injury sustained which kept him out of action for the Gunners.

It has now been confirmed that the young talented and fast rising star is back to the squad for the club ahead of their crucial ties at this period of the season. The return of the star player alongside Emile Smith Rowe was confirmed by one of the leading football site, Sky Sports with a post via their verified twitter handle. 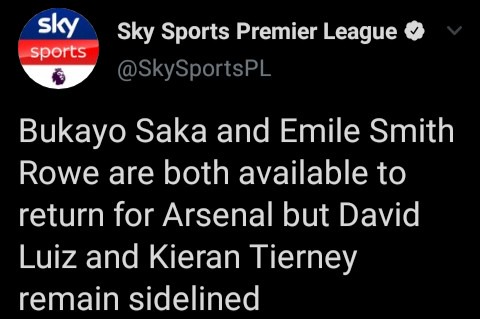 Bukayo Saka and Emile Smith Rowe are both available to return for Arsenal but David Luiz and Kieran Tierney remain sidelined.

Arsenal with this good news and having been given green light for the fitness of these important players, will be hoping to turn things around for good when they play against the Czech professional club giant, so as to have a boost ahead of the second leg to be played next Thursday away at the Sinobo Stadium. Good luck to the Gunners as they hope to cruise past the Jindrich Trpisovsky's side in the double legged ties, to book a spot in the semi-finals of the competition as the season is winding up.