Just six years after winning the World Cup, Andre Schurrle announces his retirement from football. The German is 29 years old, and became one of the few people in the profession that dim it fit to retire before clocking 30 without any complicated health issue. Andre Schurrle currently terminated his one year remaining contract with Borussia Dortmund after spending the entire last season with Spartak Moscow.

"I want to let you know that I'm stepping away from Professional football" he said on Istagram. This came as a shock to most lovers of football and lot of people were showing concern over what ignited this sudden decision. Andre Schurrle said he has been considering retirement for a while now, claiming he doesn't need the applause that makes up football anymore. He had 11year career of great moments, winning the Premier league with Chelsea, two German cups with different Bundesliga sides (Wolfsburg and Dortmund), and also winning the most prestigious World accolade in 2014. Andre Schurrle is such an amazing player to watch, and his rare talent would be missed in the football scene. Do you think it's the right decision to end his career now or he never should have considered that? 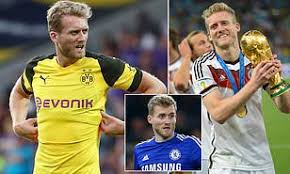 Don't forget to drop your comments! Thanks for reading!