The absence of Kante in the midfield role for France affected Pogba in the UEFA nations cup finals.

By Michphil (self media writer) | 7 days ago

The final match of the UEFA nations cup takes place today as both Spain national team and France national team trade tackles to determine the country that will be lifting the silverware at the end of the game.

The trophy was presented on the pitch by Real Madrid and Portugal's legend Luis Figo, as the cup was last won by Portugal. The game which ended in 0-0 draw at the end of the first half, saw Paul Pogba of Manchester United, being more committed in tackling than his usual distribution of passes whenever N'golo Kante is on the pitch as the defensive midfielder for France. Paul Pogba got booked for a rough tackle on Sergio, an event which wouldn't have occurred if Kante was on the pitch.

Paul Pogba is mostly operational as a defensive midfielder in tonight's game against Spain because his midfield partner is not as functional as Kante who does more of the tackling works and dispossessions of balls from his opponents.

This is an exposition that Kante is an engine room in the France national team. 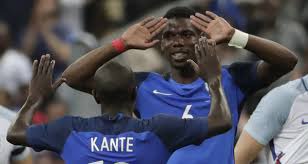 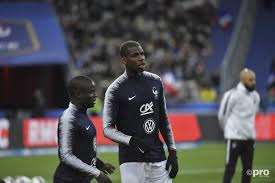