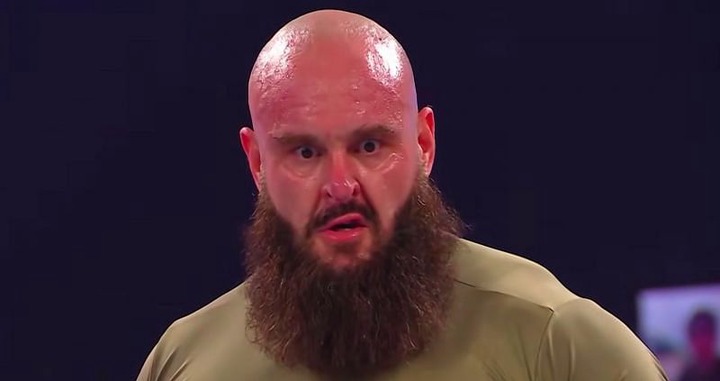 Braun Strowman has sent a hilarious insult to WWE Official Adam Pearce in the wake of the pair's loss last night on Monday Night RAW.

The Monster Among Men and Adam Pearce were forced by Shane McMahon to partner up, challenging The Hurt Business for the RAW Tag Team Titles, after Strowman complained about the way he had been treated in recent weeks. In the end, The Hurt Business would retain their gold, after Adam Pearce took an unexpected and embarrassing pinfall loss, while Strowman watched on from the corner.

The enraged Strowman didn't hold back in his tweet, in which he reminded Pearce how he was able to win the RAW Tag Team titles "with a 10 year old."

With the loss, it seems as though Braun Strowman may have been reasonable in his assumptions on the way he's been handled on the red brand. With the blame seemingly sat with Shane McMahon, it's safe to assume we could be in for a Strowman/McMahon rivalry in the near future. Possibly heading into WrestleMania.

Braun Strowman was out with an injury for weeks

After Survivor Series 2020, Braun Strowman had reportedly been in line to face Drew McIntyre for the WWE Championship. However, he instead attacked Adam Pearce on RAW and was written off of television under the guise of a suspension.

In reality, Strowman was dealing with a knee issue he suffered at Survivor Series, and needed to take several weeks off in order to rehab the injury.

Strowman returned to WWE TV a number of weeks ago on SmackDown, where he mauled virtually every member of a multi-man tag team contest, including several notable WWE Superstars, before the Royal Rumble.

After failing to make an impact in the Rumble match, Strowman demanded a place in the WWE Championship Elimination Chamber match, only to be told it was not possible due to a technicality.

Last week on RAW, he failed to qualify for the WWE Championship match to be held the following week, after he was beaten by Bobby Lashley, who would go on to win the title from The Miz.SH

Ahead Of UCL: Guardiola Drops Hint Of His Lineup Against Chelsea, Names His Key Player If KDB Remains Unfit

Arsenal told to pay £40m to complete a deal for highly-rated Premier League No.8 midfielder

Leicester City's possible line up against Chelsea ahead of their Premier League clash.

Opinion: "No Room For Mistakes", Chelsea Will Thrash Leicester & Qualify For UCL With This Tactical Lineup