By MzPrecious (self media writer) | 2 years ago 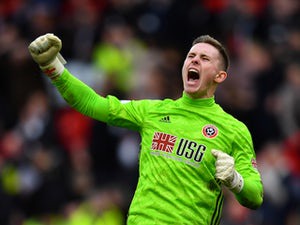 Manchester United football club have reportedly agreed a deal with Sheffield United football to allow Dean Henderson to extend his loan spell at Bramall Lane until the end of the season.

The 23yrs old talented football player's current terms will expire on the 30th day of June, 2020 which was initially scheduled to be more than a month after the end of the campaign until the infection forced the season to be extended.

International Federation of Association Football (FIFA) have allowed football clubs to agree short term deals for football players whose contracts run out, although Manchester United football club could have refused to extend Dean Henderson's deal given that he has played a key role in Sheffield United football club challenging Ole Gunnar Solskjaer's side for a European spot this season.

The Blades would leapfrog Manchester United football club into the 5th place if they win their game in hand on Wednesday which as things stand would be enough to qualify for the Champions League next season.

However, The Guardian reports that the two football clubs have now agreed to let Dean Henderson see out the campaign at Bramall Lane with the deal expected to be finalised in time for the 23rd of June deadline.

Dean Henderson, who would have missed Sheffield United football club's final seven league games of the season had he been recalled has kept 10 clean sheets in the Premier League in the year 2019/2020 second only to Burnley's Nick Pope.

Content created and supplied by: MzPrecious (via Opera News )