By Roseline-Writes (self media writer) | 26 days ago

Arsenal under 23's were in football action today, as they welcomed Brighton to the Emirates for a chance to go top of the table in the academy premier league. It was a big tie, as Arsenal fielded star teenagers including the likes of Folarin Balogun (academy graduate), as well as experienced international goalkeeper Karl Hein. 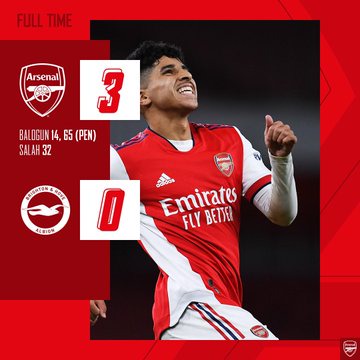 Brighton were no pushovers in the game, as they brought the heat and were on the dominant end of the game until Arsenal won a penalty midway through the first half. This penalty was taken by Balogun, and although he missed it first time he scored the rebound from the keeper's save. Salah went ahead to double the lead for Arsenal before half-time, and when the second half resumed Balogun was able to score the third for the gunners after an impressive skill he did to win a penalty. This time he scored directly from the penalty spot to give Arsenal all three points against a very tough Brighton.

Every Arsenal fan would be hoping for a similar outcome tomorrow when the first team travel to play the senior Brighton team at the Amex. Especially now that there is a lot of confidence brewing from the club and it's supporters following their impressive win over Tottenham last week.

Content created and supplied by: Roseline-Writes (via Opera News )