Conte vs Zidane: How Many Trophies Won And Who Manchester United Should Appoint

Zidane and Conte are two great managers and they have proven it over the years with different clubs. Manchester United wants to replace their manager after a series of bad results, and losing to Liverpool was the worst under him. This is the comparison of the statistics, trophies won and who Manchester United should appoint. 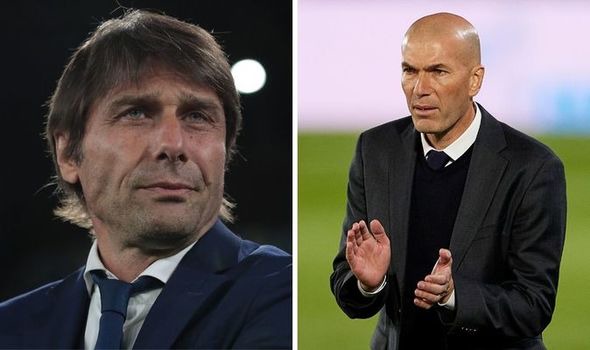 He was appointed after Rafael Benitez lost to Barcelona by 4 goals, Zidane immediately changed the Real Madrid 4-4-2 formation to 4-3-3, making use of Ronaldo, Bale, and Benzema as the attackers. He was in charge of 263 games; 174 won, 53 drawn, and 36 lost. In his 6 years as a manager, he won 11 trophies, 3 championship leagues, 2 La Liga, 2 Super Cups, 2 FIFA Club World Cups, and 2 Copa Del Rey, but his second tenure at the club was not good enough.

The former Inter and Chelsea manager is a man with the same pattern as Jose Mourinho and Tuchel. He prefers using the 3-5-2 formation. He has managed 518 games for more than 3 clubs. He has won 306, drawn 122, and lost 90. He won 9 trophies during his tenure at 3 clubs. He won 2 trophies in two seasons for Chelsea, and the remaining 7 came from managing Inter Milan and Juventus.

The Manchester United hierarchy is thinking about whether they should appoint a manager with the same style of play as Mourinho and stick to the club's policy of attacking all the time. The Conte pattern is very defensive but can guarantee success and less loss. Zidane is an attacking minded manager, and he is open to joining the team. Manchester United should go for Zidane because of his relationship with Ronaldo and Varane.

Conte's rigid style of management might be the only thing to disqualify him. Apart from that, he will bring the best out of those players who find it difficult to play a particular pattern. In Manchester United's last game, they were all frustrated.