The controversial finish to the RAW Women's Championship match between Sasha Banks and Asuka was the biggest fallout from Extreme Rules. There were many unanswered questions and also speculation that an authority figure could return to clear the air on RAW. An authority figure did appear!

Stephanie McMahon appeared on the big screen on this week's RAW to announce that Asuka and Sasha Banks would have a rematch for the RAW Women's title. 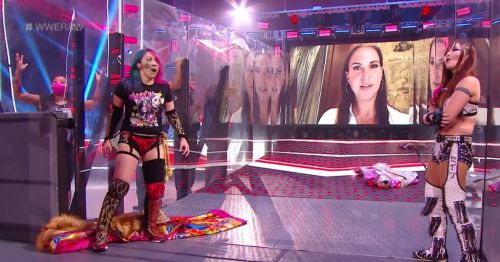 McMahon tweaked the rules for the match as she added that both the superstars could lose via pinfall, submission, count-out, DQ and even if anyone from the outside interferes.

McMahon also added that despite the belt currently being with Banks, it does not belong to the Legit Boss.

We had reported earlier via Dave Meltzer that the original plan for Extreme Rules was to reportedly have Asuka retain the RAW Women's title.

However, Vince McMahon changed his mind at the very last minute and called for a different finish. The new ending saw Bayley rip referee Eddie Orengo's t-shirt off after Asuka's green mist blinded him. Bayley donned the role of an unofficial referee and completed the pinfall that Banks had over Asuka.

'The Golden Role Models' might have thought that they had pulled off a massive heist, but Stephanie McMahon popped their bubble on the RAW after Extreme Rules.

Banks and Bayley came out on the latest episode of RAW, and they showed off all the women's titles. Banks said that she rightfully fought for the Championship and deserved to be the champion, unlike Asuka who was handed the belt by Becky Lynch.

Asuka and Kairi Sane came out before Stephanie McMahon appeared via a satellite feed to make the huge announcement for next week.

The idea here is simple. WWE has been booking PPV-worthy matches for its weekly TV shows to boost the ratings. Sasha Banks vs. Asuka is just one example.

Big Show and Randy Orton were originally slated to have their match at Extreme Rules, but the unsanctioned contest was moved to the main event of this week's RAW.

Jeff Hardy and Sheamus' Bar Fight was also rescheduled to happen at the upcoming episode of SmackDown, and the pattern here is easy to breakdown.

Nonetheless, Banks and Asuka should have another solid match next week, especially when you consider that there won't be any interruptions. Who do you got? Let us know in the comments section.