Bernd Leno Would Only Be Out For Six Weeks: Arsenal's Official Statement 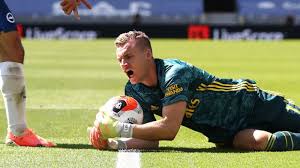 Contrary to the opinion of many media online, concerning the degree of the knee injury that Arsenal's goal keeper, Bernd Leno, suffered last weekend at the Amex stadium, away to Brighton, which suggested that Bernd would need at least 1 year to recover.

News report from the Arsenal physios today, confirmed that the goalkeeper may be back earlier than expected as his injury was not too degenerate. They estimated his return date to be between 4-6 weeks. This is such a good news for Arsenal supporters globally, as they know that they really wouldn't be in Premier League's top 10 if not for the miraculous saves that Bernd Leno has done for them this season. Bernd obtained his injury while contending for the ball midair with Brighton's fox striker Neal Maupay. Maupay went ahead to nudge Bernd who was still on the air, in a bid to get him to land outside the box so he could win a freekick, but his clumsy trick only brought injury to the decent goalkeeper. Although claiming innocence, Bernd Leno confronted him when he was being stretchered off the pitch, a sign that the goalkeeper knows that the player intentionally fouled him. As surprising as it was, Maupay escaped without any reprimand from the referee and even went ahead to shatter the hearts of the gunners' faithfuls even more when he scored the decisive goal that earned Brighton all 3 points in the encounter. 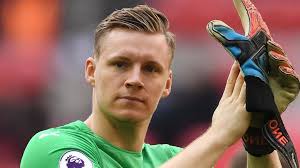 Bernd was wished a speedy recovery by many footballers immediately, and one worthy of note was his fellow goalkeeper David De Gae of Manchester United, with messages of returning stronger on his twitter account. Bernd is expected to miss the rest of the matches of the 2019/2020 EPL season, but however should be available to start the new season for Arsenal.

How happy does this news make you? Drop your comments on Leno's recovery.