By LatestUpdate01 (self media writer) | 1 year ago

Real Betis and Spanish winger Joaquin has recalled a memory how he turned down a move to Chelsea early in his career when Jose Mourinho was at the helm at Stamford Bridge.

Joaquin, 38 who is on the verge of concluding his career in the top division started his football career in Spain with Real Betis. The Winger started catching attraction in his early days and it even-handed him a call-up in national colours.

Mourinho who was financially heavily backed by Abramovic in his first spell at England reportedly was eager to sign him in blue colours. The Portuguese reportedly even travelled to Spain to watch him on several occasions and reportedly was in stands during Spain’s match against England at Bernabeu, in November 2004. Joaquin played for 80 minutes in that game as the home side registered a 1-0 victory.

Mourinho later apparently had a meeting with the player citing his eagerness to sign him but Joaquin reportedly later pulled the plug on the move, deeming a switch to England was not something he would relish.

Speaking about his reasons for rejecting Chelsea, Joaquin told AS: “First, because I didn’t want to leave Betis.

“A week before we had played at the Bernabeu against England. I had a great match and Jose was there, he was interested.

“A few days later I recorded an advertisement in Madrid and when I returned on the AVE [high-speed rail], my father tells me that Mourinho is in Seville, waiting for me at the Alfonso XIII hotel.

“And I’m on the train thinking about England, the weather, the language… I made a cocoa and when I arrived, I told to my father: ‘Dad, I’m not going’. Anyway, he’s going to convince me, I thought. “And I did not go. The next day Mourinho returned and [Manuel Ruiz de] Lopera [former Real Betis chairman] told me that I had to sell myself for the future of the club. I answered no.”

Joaquin won the Copa del Rey with Betis that season but could have enjoyed a bigger honour with Mourinho in England as Chelsea won two back to back Premier League titles under Mourinho in that period.

Chelsea and Jose Mourinho were rejected by Joaquin back in 2005.

Real Betis legend Joaquin won a treble against Athletic Bilbao last December at the age of 38 years and 140 days. The age is just a number, the player proved it. The star was a past miss of Stamford Blues. It was the reign of Jose Mourinho. Chelsea offered a deal for the Spaniard taking consider his stunning performance in Spain. But the player was in deep love with La Liga. He was used to the Spanish culture and refused the Mourinho offer.

Speaking to AS, Joaquin revealed the reasons for the refusal. The setting is the 2004/05 season in the Seville side. After 5 years with Real Betis, the player got a call from England. The star manager of Chelsea Jose Mourinho was in search of potential wingers and the query take him to Spain. He watched La Liga games of Betis and shortlisted Joaquin in his wishlist.

The Blues were lacking backing options in the wings at that time. Dutch winger Arjen Robben and Oliviera were the first choices of Stamford Bridge and Jose needed some part-time wingers for the position. His Spanish tour takes him to Benito Villamarín Stadium and he had a dialogue with club officials.

Betis decided to go with the player’s decision. Because despite the huge amount of money, Joaquin was influencing the games of Betis. The player said a big ‘no’ to the Premier League. But he didn’t announce the reason that day. Now he opened up the discomforts he had.

His obsession with the Spanish game style and he practiced that for a long time. He is not accustomed to the reputation of English and wanted to stay out of that culture.s unlike other footballers, England was not an attraction for him. He said, “thinking about England, the weather, the language… I made cocoa and when I arrived, I told my father: ‘Dad, I’m not going”.

The season went off and Chelsea won back to back titles in the next year. It may add some regret to the player but his time in Spain was really glorious. He had a five-year spell in Valencia and returned to Betis. This is the fifth year of his 2nd Betis spell. The winger is still in the flying action in Betis formation.

Joaquin got a contract extension last year till 2021 when the player turns 40. He loves to end up his career in his mother club and age didn’t affect the performance of the player on the pitch. His season campaign includes 10 goals and 2 assists from 28 games.

Betis is eight points clear of the relegation zone in La Liga. They are playing in Copa Del Rey also this season. The right-winger Joaquin is one of the preferences of manager Rubi in right-wing. The dedication for the club and the sincere attitude keeps the player in the range of Betis squad and criticisms won’t hunt that mind.

After the restart of Bundesliga, Spain is also setting up the pitches to open up the suspended season. Probably the end of June will bring back the La Liga action in Spain. Adjusting with the ‘new normal’ is the only solution for the current crisis and a new footballing culture is evolving in this unusual situation.

Chelsea are reportedly planning to make a big-money move for West Ham United defensive midfielder Declan Rice when the transfer window will be re-opened in the summer.

Despite the financial implications due to the coronavirus pandemic, the West London club could be in a position to continue with their plans this summer given their recent lack of activity.

However, according to The Mirror, it may take the sale of their key player N’Golo Kante to tempt the Blues into following up their interest in 21-year-old English midfielder.

Kante, who has been hindered by multiple injuries this campaign, has been rumoured with a switch to Ligue 1 giants Paris Saint-Germain and Real Madrid that later has been as the clear favourite to lure the Frenchman at Santiago Bernabeu.

The report claims that Chelsea officials have identified Declan Rice as a direct replacement for the World Cup-winning midfielder.

Although the West Ham United are keen to retain the services of their most prized asset, who has been valued at £70m and the Blues must break the bank in order to lure him at Stamford Bridge. 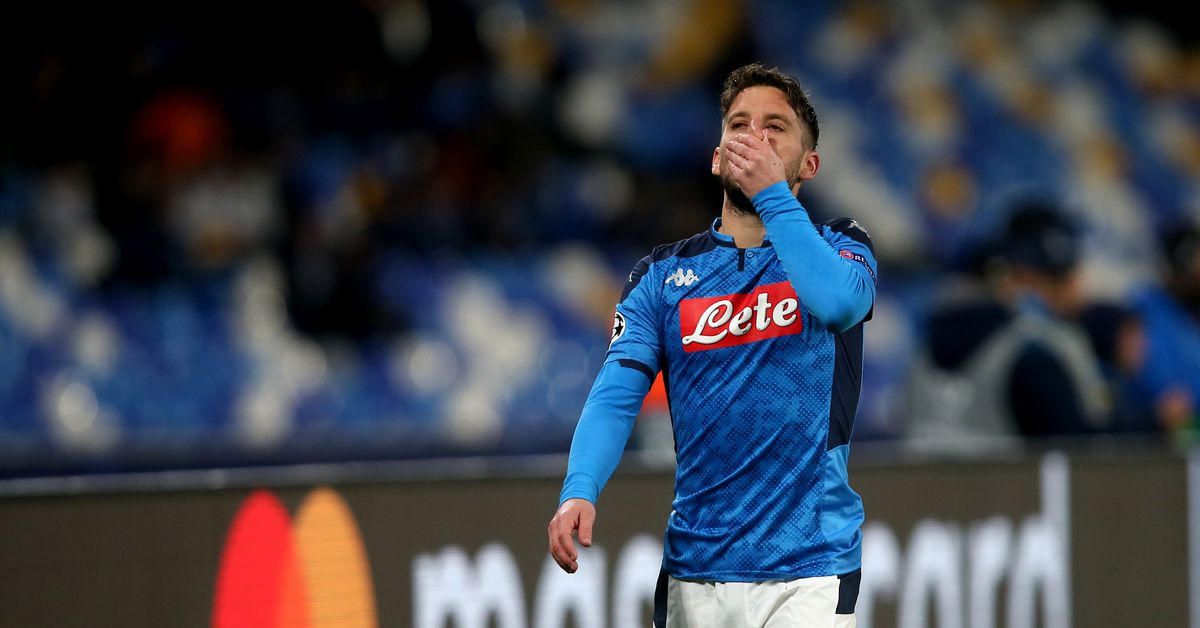 While Inter Milan are firmly in the driver’s seat, it appears that Chelsea are still in the race for Dries Mertens.

According to Goal, the Napoli forward has still not given Inter any confirmation about their offer, and that is giving the Blues renewed hope that a deal can yet be completed.

Like Lampard, Antonio Conte is also a big fan of the striker and wanted to sign him at Chelsea as well. However, due to the increased demand, Mertens is taking his sweet time in deciding his future destination simply because he can afford to.

Mertens is reportedly seeking playing-time assurances and at least a two-year-contract. Even if that contract-length demand is unlikely to be too much of a hassle for Chelsea these days (and we could probably offer higher wages, too), the other demand could prove to be a deal-breaker. Meanwhile, according to HLN, Inter are willing to pair Mertens with his compatriot Romelu Lukaku up front regularly.

Combined with his ambitions to win the Scudetto — as per Corriere dello Sport (via Sempre Inter) — and his familiarity and comfort with the Serie A, Mertens would likely prefer Antonio Conte’s project rather than Frank Lampard’s.

And of course, Mertens’ current club, Napoli, are still in the picture, too, and are hoping that he stays in Naples. According to Gianluca Di Marzio, the ball’s now in Aurelio De Laurentiis’ court regarding the player’s demands.

With three clubs clamoring for his signature, Mertens is in a strong position to decide his future. He’s surely in no rush, and so we wait.

After weeks of lockdown, the football was back… in Germany.

Here, in the UK, the Premier League project restart talks continue while League Two has been declared null and void.

Elsewhere, Tottenham star Dele All was in the headlines after suffering a harrowing home attack where he was robbed at knifepoint for a collection of luxury watches.

Arsenal ace Mesut Ozil, meanwhile ,is no stranger to criticism. But this time the Germany World Cup winner has come under from his former manager with Unai Emery sticking the boot in.

Here, our chief sports writer Jeremy Cross runs the rule over the past seven days…

Rory McIlroy - The world's No.1 golfer came out swinging at Donald Trump, insisting he would never play a round with the US President again after accusing him of trying to turn the coronavirus crisis into a 'campaign rally'.

Fabrice Muamba - Made an impassioned plea for the NHS to be saved - and so he should. If it wasn't for them he would have died in 2012 after collapsing on the pitch at White Hart Lane.

Mason Mount - Video called an elderly Chelsea fan to see how she was coping during lockdown and almost landed himself a date with the woman's granddaughter. Hilarious and heartwarming.

Qique Setien - The Barcelona boss has been told his brand of football will not win his club the Champions League - by Lionel Messi. Hardly a ringing endorsement.

Dele Alli - The England and Tottenham ace was held at knifepoint during a frightening burglary at his north London home.

Mesut Ozil - Unai Emery might have left Arsenal, but this hasn't stopped him from attacking the German international with a verbal assault on his attitude. Brutal.