By Adecredible (self media writer) | 4 days ago

Sadio Mané made his Bundesliga debut on Friday, scoring one of his side's goals against the Europa League champions 1-6. 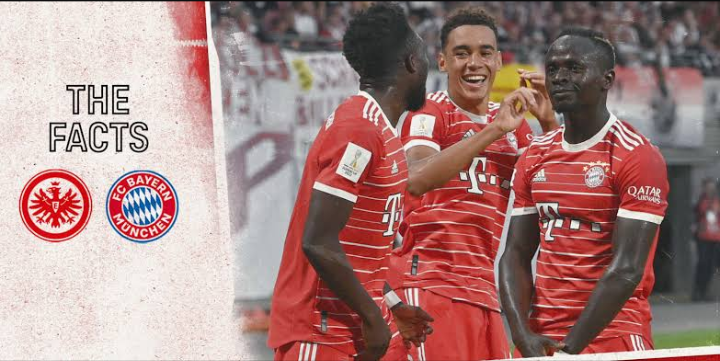 Sadio Mané made his Bundesliga debut on Friday, scoring one of his side's goals against the Europa League champions.

Bayern kicked off the post Lewandowski era in the Bundesliga with a 6-1 thrashing of Europa League champions Eintracht Frankfurt, who face Real Madrid in the European Super Cup on 10 August. In the opening game of the 2022-23 German championship, the Munich side were a steamroller in the first half, which ended 5-0. For his part, Sadio Mané, until this summer one of Liverpool's emblematic players, made his Bundesliga debut by scoring Bayern's third goal and putting together good combinations with his new team-mates.

The first half was a nightmare for Eintracht Frankfurt, who struggled in defence and paid dearly for it. Bayern, German champions in the last ten editions of the tournament, took the lead as early as the fifth minute when Joshua Kimmich scored from a free kick. And in the 11th minute it was Benjamin Pavard who scored the Bavarians' second goal, after Thomas Müller and Jamal Musiala had played in.

On the half-hour mark, in the 29th minute, it was Mané's turn to score his first Bundesliga goal, headed in by Serge Gnabry. Both Mané and Gnabry played up front, but it was clear that, without Lewandowski, Bayern coach Julian Nagelsmann's gamble was to shift his attacking players around.

The fourth came from Musiala, assisted by Thomas Müller in the 35th minute. And Müller himself sent in the ball for Gnabry to make it 5-0 in the 43rd minute. It was a message from the perennial German champions to their rivals as they open the Bundesliga 2022-23. Runners-up Borussia Dortmund face third-placed Bayer Leverkusen on Saturday. Leipzig visit Stuttgart on Sunday.

Eintracht Frankfurt improved in the second half and, after Kristijan Jakic had a goal disallowed for offside, it was Kolo Muani, after a mistake by Manuel Neuer, who pulled one back in the 64th minute against a Bayern side who had taken their foot off the gas. But Musiala, on a pass from Leroy Sané, completed his brace in the 83rd minute. The second half saw Bayern make their Bundesliga debuts for Ryan Gravenberch, Mathys Tel, Matthijs de Ligt and Noussair Mazraoui.