Bobby Lashley has been thriving ever since he joined The Hurt Business. With Championship gold seemingly inevitable, The One and Only Bobby Lashley would capture the title at Payback 2020 after defeating Apollo Crews.

Bobby Lashley and The Hurt Business has continued to feud with Apollo Crews, who is now aligned with Ricochet and Mustafa Ali after Cedric Alexander turned on him and his friends. 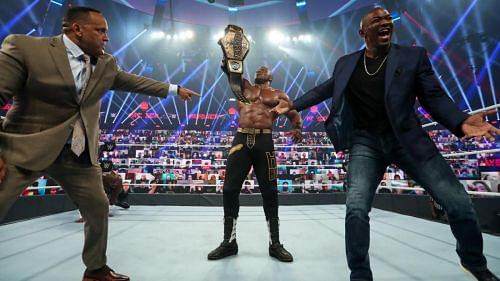 Another major part of Bobby Lashley's role in RAW is fighting off Retribution, who are now reportedly in quarantine after coming in close proximity with someone who tested positive for COVID-19.

Mustafa Ali made a big impact on RAW, pinning MVP to win the six-man tag team match for his team. Bobby Lashley called out Mustafa Ali on Twitter and the former Cruiserweight title challenger responded by taking a shot at the current Champion:

Mustafa Ali makes a lot of sense as the next United States title challenger since Bobby Lashley has defeated Apollo Crews on two consecutive PPVs. The feud has primarily been Apollo Crews vs The Hurt Business, but Mustafa Ali has joined the battle alongside Crews and Ricochet.

It's going to be interesting to see where the rivalry goes and how it benefits Mustafa Ali.

Does Mustafa Ali have a shot at becoming the United States Champion against Bobby Lashley?

Mustafa Ali has yet to touch gold in his tenure with WWE. He came close with the Cruiserweight Championship but fell short to the man who is also now a member of The Hurt Business - Cedric Alexander.

Many fans feel that Mustafa Ali has what it takes to be a big-time player in WWE nad it's hard to disagree. While he certainly has a lot of potential, WWE hasn't always utilized him - recently featuring him in Main Event matches that caused some concern among fans who felt that WWE didn't want to push him.

Either way, Mustafa Ali is young and even if he loses, he will be a good opponent for Bobby Lashley. However, given the way the United States title has been changing hands these last few years, it's hard to rule out the possibility of Ali being the next Champion.