Champions League Analysis, Results And Tables After PSG Drew With Leipzig On Matchday 4

Matchday 4 of the UEFA Champions League group Games continue with Star studded Paris Saint Germain side, still struggling with their style of play while more Teams joined Juve and Bayern Munich on the road to the knock out stage. 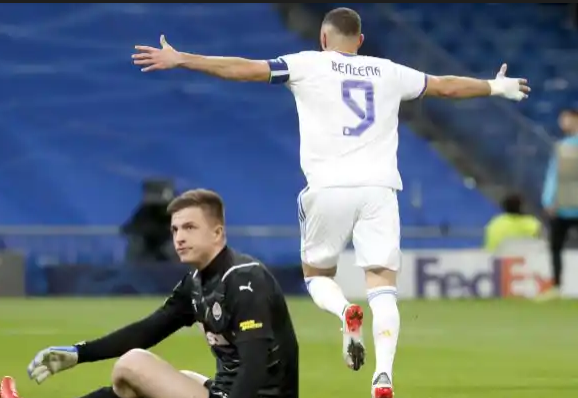 After trashing Shakhtar Donetsk 0-5 in Ukraine on day 3, Real Madrid continue their great work ethic in Spain as Benzema's 14th minute Strike was cancelled in the 39th minute by Dos Santos Pedro to give life to Shakhtar Donetsk at the interval but Benzema Winner in the 61st minute secured another 3 points for the Los Blancos in front of their supporters. Real Madrid won 7-1 on aggregate as Benzema saved the day.

Man City again proved their superiority over Club Brugge with an emphatic 4-1 win at the Ethiad Stadium. Foden had opened scoring in the 15th minute before Stone's mistake levelled for the visitors just 2 minutes after, but the unstoppable force of Mahrez, Sterling and Gabriel Jesus settled the night with Cancelo assisting 3 goals while Gundogan helped Sterling with his first Champions League goal this season. On aggregate, it's City 9 goals to 2 against the Belgian side.

Liverpool refused to go low against the hard fighting Atletico Madrid as they maintain their 100% record in the Champions League this season. Although Mohamed Salah was denied by Oblak on few moments but Diogo Jota's 13th minute opener and Sadio Mane's 21st minute goal were enough to earn the Group Leader a ticket to the next round of the tournament. Atletico's Felipe was sent off for a tackle against Mane in the first half and this changed Coach Simeone's plan for the night as the 2nd half was boring and barren.

It was no doubt another unconvincing night for Mauricio Pochettino's men away in Germany after coming from behind to win 3-2 over Leipzig at home on day 3. Nkunku's early goal for Leipzig triggered Midfielder Wijnaldum into action as he Played the striking role in the 21st and 39th minute of play to put visiting PSG ahead in the first half. In an encounter that showed much is still to be done by Pochettino to utilize and maximize his Star studded squad, Szoboszlai's dying minute Penalty conversion secured a 2-2 draw for the German host as they denied PSG of the Group's top spot. 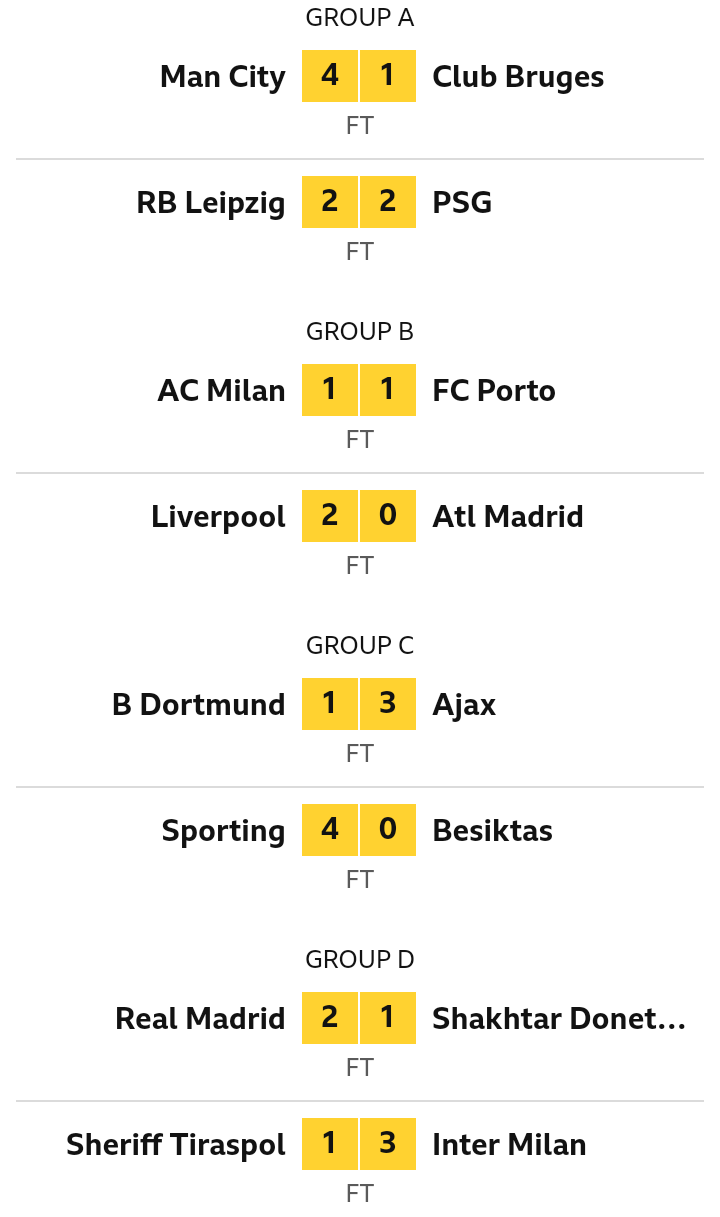 In another venue, Inter Milan beat Moldovan side, Sheriff Tiraspol 1-3 as the Italian Serie Champions repeated same scoreline against same Team as it was on day 3, to make it 6-2 scoreline on aggregate. 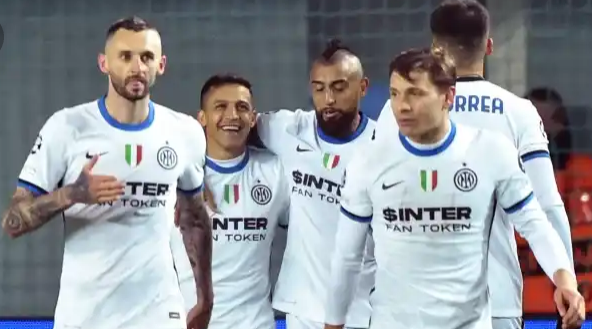 Man City are on top of Group A with 9 points, just 1 ahead of struggling PSG after hopeless Leipzig held the Parisians to a draw in Germany on day 4. A draw will be enough for City to qualify to the next stage while a win or 2 more draws will help Pochettino's men to book a place in the Knock out stage. 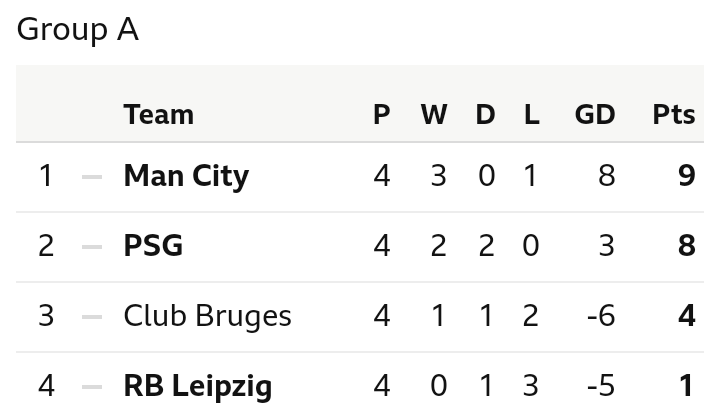 Liverpool have joined Juventus and Bayern Munich in the next round of the Champions League this season. The Red's first half superiority over Spanish Giant, Atletico ushered them into the next phase. They lead Group B with 12 points while Porto and Atletico Madrid will have to fight for the 2nd slot for qualification in the Group. 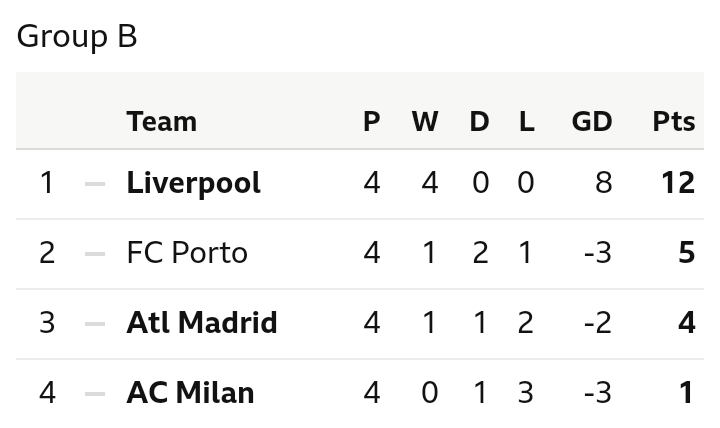 Group C Leader Ajax also maintain their unbeaten record in the Champions League this season after trashing Dortmund 1-3 in Germany, as they sail through to the next round with 12 points in 4 games. However, Dortmund still have hope of reaching the next phase but they will have to go against Portugal's Sporting Lisbon for the 2nd ticket in group C because they both have 6 points from 4 games each. 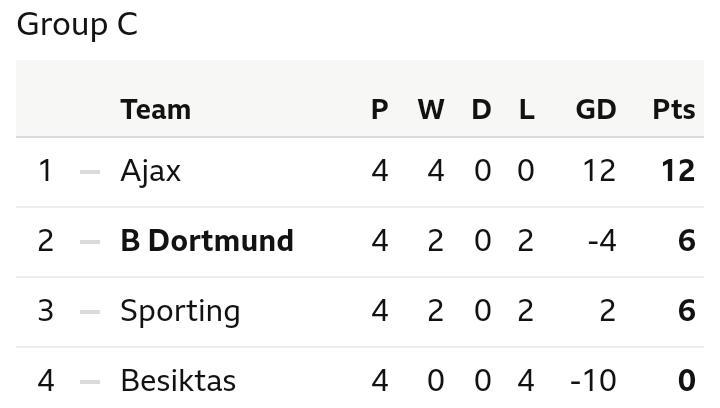 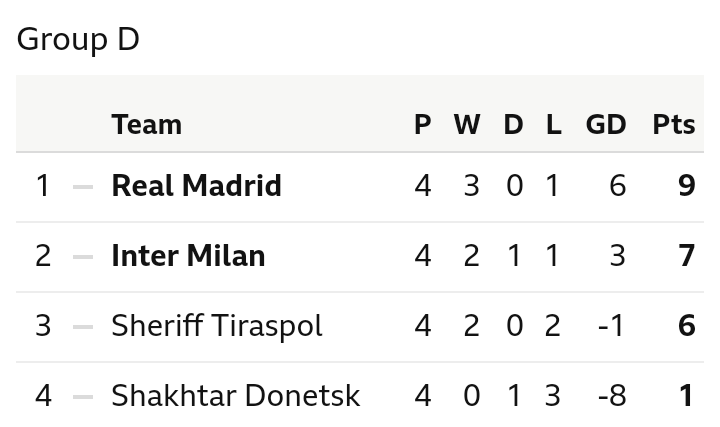 Spanish Giant, Real Madrid are Leader in Group D with 9 points on day 4, having lost to only sheriff in the Group. Inter trails the Leader by 2 points as the qualifications for next phase is still opened to Sheriff Tiraspol with 6 points even after their 1-3 loss to Inter Milan. 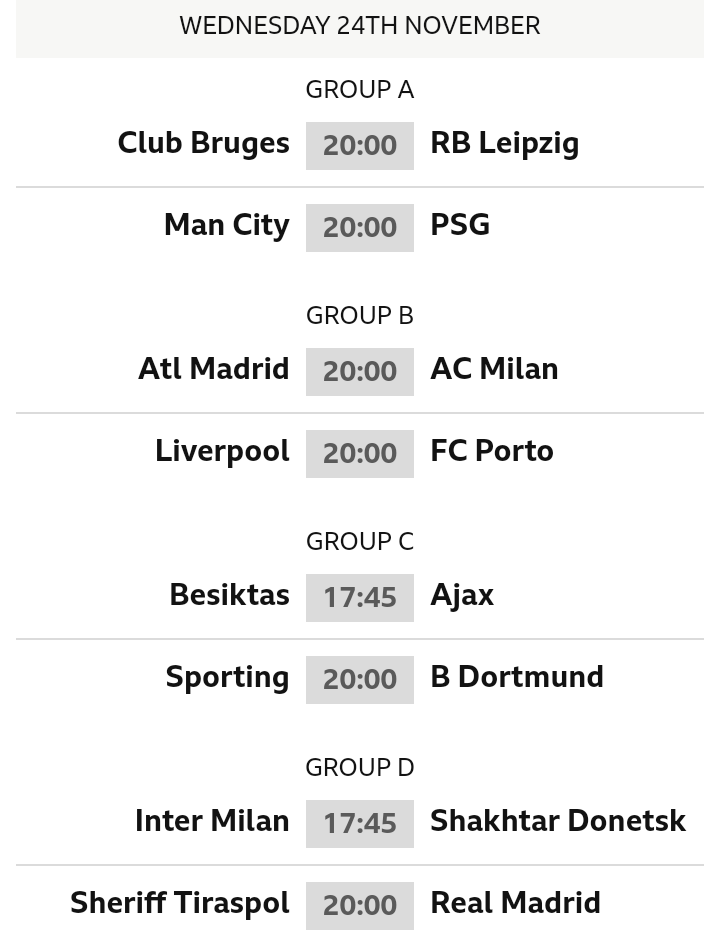 PSG will travel to England to face City in their superiority battle for the top spot in Group A on day 5 while Sheriff Tiraspol will host Real Madrid to replicate the first leg magical win at the Santiago Benerbeu in order be eligible for the Knock out stage. Liverpool will also be waiting at Anfield to maintain their unbeaten run against Porto.

Juve, Bayern Munich, Ajax and Liverpool are through to the next round, which other Club will join them on Matchday 5? Follow for more stories.