Who is the UCL's all-time top goalscorer?

By Tolani.com (self media writer) | 2 years ago

Former Real Madrid legend Cristiano Ronaldo is UEFA Champions League's highest-ever goalscorer. The legendary Portuguese forward has been the epitome of consistency in Europe and currently holds several records in the tournament. 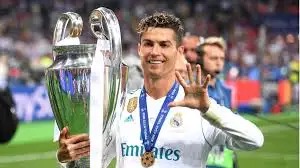 Ronaldo has scored an astounding 128 goals in the Champions League, and has 131 overall in all UEFA club competitions. His tally is 14 more than that of former Clasico rival Lionel Messi, who sits on 114 UCL goals in his career. Ronaldo and Messi are the only two players in UCL history to reach the triple-digit mark, with the next highest tally being that of Raul at 71 strikes.

Ronaldo took 169 games to reach his total of 128 goals. His first strikes came against AS Roma in Manchester United's stunning 7-1 thrashing of the Italian club in 2006/07. He then went on to famously win the UCL with the Red Devils and scored in the final against Chelsea.

The winger's debut season in the Spanish capital saw him rack up seven UCL goals, followed by six the year after. A few years into his move to Madrid, Ronaldo gradually began drifting further into the centre and occupy lethal goalscoring positions. That, in turn, saw him score goals in abundance for Los Blancos.

In his last three years at the club, Ronaldo spearheaded Los Blancos to an unprecedented achievement in the Champions League. Zinedine Zidane's men conquered Europe thrice in three years to etch their names into the history books with a 'three-peat' of the UCL.

The 35-year-old has a total of five UCL titles to his name, four with Real Madrid and one with Manchester United. He's the only player to score in all six group stage games and three (!) UCL finals. Ronaldo also holds a unique record of being the only player to score ten goals against a specific opposition in the tournament. Quite ironically, he's scored ten against his current club, Juventus. 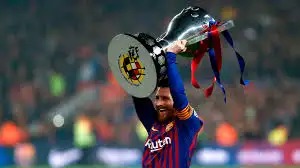 Messi comes in second with 114 goals and four UCL titles. After Messi, no other player is close to a 100 Champions League goals. In fact, the difference between the second and third-placed players on the list stands at a whopping 43 goals.

Joint-fourth place pair Karim Benzema and Robert Lewandowski are at 64 goals apiece, just seven less than third-placed Raul. Both strikers would hope to surpass Raul's tally before they call off their spectacular careers.

Former Red Devils striker Ruud van Nistelrooy comes in at fifth place on the list after scoring 55 goals for PSV, Manchester United, and Real Madrid in the UCL. Another Premier League great, Thierry Henry, stands at sixth in the all-time scorers list with 50 goals.

Zlatan Ibrahimovic holds the unique distinction of playing for six clubs who won the prestigious title but never winning the UCL himself. The towering Swede played for Ajax, Juventus, Inter Milan, Barcelona, AC Milan, Paris Saint-Germain, and Manchester United. However, the elusive Champions League trophy is something he never got his hands on. Former AC Milan great Andriy Shevchenko has scored the ninth-most goals in the UCL with 48 strikes. The Ukrainian is followed by another Rossoneri icon, Filippo Inzaghi, with 46 goals in the Champions League.