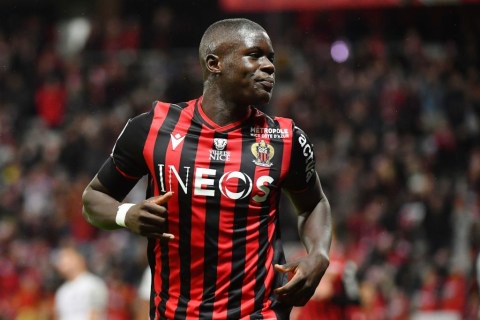 Arsenal have held talks with free agent Malang Sarr as Mikel Arteta looks to bring in defensive reinforcements this summer, though are stalling over an official contract offer.

The Gunners have struggled defensively all season while Arteta has been forced to use left-backs Sead Kolasinac and Kieran Tierney at centre-back since moving to a back three formation.

There is a clear need to bring in a new central defender this summer despite William Saliba’s arrival, with several surplus-to-requirements centre-backs likely to be moved on.

Sarr helped Nice up to fifth place in Ligue 1 before the season was halted (Picture: Getty) According to Goal.com, that has seen Arsenal turn to 21-year-old Sarr, who is a free agent after his contract with Ligue1 side Nice came to an end.

The Gunners have held talks with the defender, who is wanted by a number of clubs around Europe including Torino, but are not prepared to offer him a contract until they know if they will be playing in the Europa League next season.

Arsenal’s unexpected victory over Liverpool has kept their slim hopes of European qualification alive and that will dictate the budget Arteta will have available to him this summer.

Premier League legends heap praise on Reiss Nelson after Arsenal down Liverpool The Gunners are hoping to cash in on Konstantinos Mavropanos this summer, which will open up a spot in the squad for another centre-back, while there are significant doubts over the form of David Luiz and Shkodran Mustafi.

Top articles by Metro Kalidou Koulibaly asking price reduced with Man City, Man Utd and Liverpool on alert In addition to Sarr, Arsenal are also keeping tabs on Reims centre-back Axel Disasi, who has been linked with both Wolves and Southampton.

‘You need it to build a squad. It’s not magic. You need to improve with quality players in the squad and you need bigger squads to compete in this competition.

There’s the challenge.’ Sarr played 19 times for Nice before the Ligue 1 season was cancelled and did not suffer defeat in his last nine straight outings, keeping three clean sheets during that run.