Manchester United hope of qualifying for champions league hits back!

By LukaTz (self media writer) | 2 years ago

Manchester United beat Crystal Palace 2-0 to keep the pressure on Leicester. Leicester defeated Sheffield United 2-0 as the battle for Champions League qualification heated up on Thursday.

Ole Gunnar Solskjaer's side had no margin for error after Leicester's 2-0 victory and Manchester United responded thanks to goals from Marcus Rashford and Anthony Martial.

Manchester united's fifth win in their last six league games leaves them in fifth place in the Premier League.United are level on points with fourth-placed Leicester who are trailing them on goal difference and one point behind third-placed Chelsea.

Solskjaer's men will be under intense pressure in their final two league games. After Sunday's FA Cup semifinal against Chelsea, United will host West Ham on Wednesday before a decisive showdown at Leicester on July 26.

Manchester United was on pressure which cost them not to have playing Chance's all thanks to Rashford who broke the deadlock in first-half stoppage-time when the England forward cleverly deceived two Palace defenders with a drag-back and slotted home from close range. 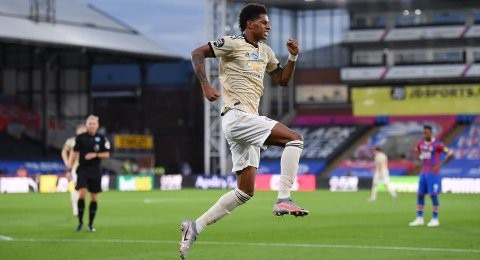 Palace complained that they should have been given a penalty moments earlier when Wilfried Zaha went down after contact from Victor Lindelof but the Referee (Graham Scott)waved away their appeals and VAR didn't change the decision with replays showing Lindelof got a slight touch on the ball.

And also Crystal Palace were denied again in the second half when Jordan Ayew's goal was ruled out for offside by VAR.

Martial killed the hope of Crystal Palace of equalizing in the 78th minute with a clinical finish after good work by Rashford. Content created and supplied by: LukaTz (via Opera News )