Kante, Chalobah, Others Didn't Travel For The International Break, Continue Training With Tuchel

Chelsea currently sits on top of the Premier League table after their impressive victory against Southampton on Saturday.

Chelsea's win against Southampton was their last game before the international break. Considering the performances of Chelsea players in recent times, it is not surprising that most of them were called up to play for their national teams.

However, some top players didn't report for national duties due to major challenges. Ngolo Kante and Cristian Pulisic were spotted at Cobham training center earlier today as they continue their training sessions with Thomas Tuchel.

Ngolo Kante was out of contention for a week having missed Chelsea's last two games against Juventus and Southampton.

According to reports, the 29-year-old Frenchman battled with Corona Virus in that short period of time. After recovering from the virus, Kante stayed behind at Cobham to work on his fitness level. 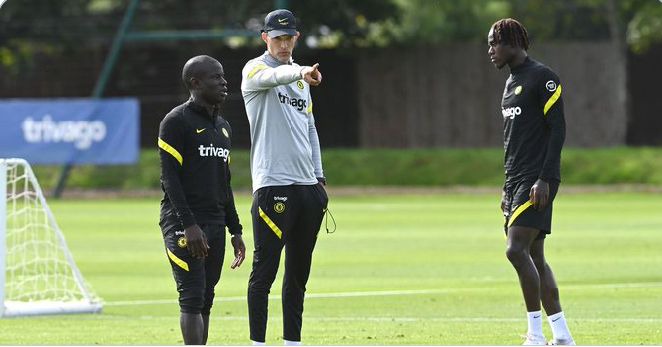 Christian Pulisic is also trying to fully recover from an injury he sustained while on national duty a couple of months ago. The American talent is expected to be back in contention after the international break.

Hakim Ziyech was also spotted in training earlier today. The Moroccan international didn't report for national duty due to his estranged relationship with the national team coaches.

Other first-team players who were not called up by their national teams are: Kepa Arizzabalaga, Trevoh Chalobah, Saul Niguez, and Hudson Odoi.

Thiago Silva is considered to be one of the most important Chelsea players and fans would hope he doesn't sustain any injury on international duty.

Chelsea needs all of their first team players back in the team after the international break as they continue to push for a Premier League title this season.