"Champions League Is Ours", Reactions As Barcelona Trashed Alaves 5-0

It had to take losing the La Liga trophy to Real Madrid to bring back the attacking prowess of the Catalan Giants on Sunday the 19th of July 2020. Prior to the match, the skipper for the club Leo Messi had expressed his disappointment on his side losing the title race to Real Madrid, even when it looked more likely to return with them just before the corona virus halt on football. The Argentine however, did not fail to congratulate the Real Madrid players for their win. 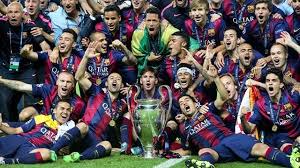 Barcelona took the trip to Alaves in good faith however, and were looking to make a statement as well as to restore the hopes of their fans on Champions League silverware, as they did not fail to score 5 goals to seal the win for them. The first goal came in the 24th minute from young Ansu Fati, before Messi and Suarez scored to take the away side 3-0 ahead into the first half break. The goals in the first half all came within a period of 10 minutes between each goal and showed promise to the former Messi-Suarez-Neymar combination that the club once had.

The second half saw goals from Nelson Semedo and Leo Messi pass a clear message to future opponents of the Catalan Giants, they are not smiling and are most likely not going to end the season dry, they are coming for the Champions League and you can't stop them.

Another major feat in this victory, is the fact that the Catalan Giants prevented Slaves from making any effort on target, their first since the restart of the League, which looks very promising.

This win marks the first big goal margin win for Quiqe Setien who took over Barcelona this year after Valverde was dragged for his lack of efficiency by their fan base. Do you see Barcelona winning the Champions League this season, drop your comments.