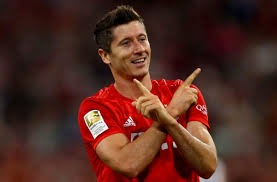 Bayern Munich inform striker Robert Lewandowski has been tipped has the favourite to win this year Ballon d'or. He has 3/1 rating ahead of the six time record winner Lionel Messi and Ronaldo who won it in five times. Messi sit second with 4/1 rating, while the Portuguese dropped to the fourth spot with 5/1 rating. The Bayern Munich Forward scored an amazing 34 league goals in 31appearance this season, having won the Bundesliga top scorer this season with four assist, led the Bavarians to another successful Bundesliga season. While in the champions league he has gone miles ahead of both Messi and Ronaldo, scoring 11 goals so far with both Messi and Ronaldo scoring two goals each in the Uefa Champions League. His outstanding performance has helped Munich this season winning the League, in the race to win the DFL Pokal and also in the Champions League Round 16 after winning the first leg away from home against Chelsea. He has been tipped by many football lovers and pundits to win the individual award, owing to his brilliant performance. He has also been tipped as the favourite to win this year European Golden Boot as he is the leading goalscorer in Europe top five leagues, currently ahead of Lazio's Ciro Immobile with 5 goals and 6 goals ahead of New Chelsea signed striker Timo Werner and Cristiano Ronaldo.

With the Champions League about to resume with action packed fixtures, who would be crowned as the World Best player in 2020?