By PoliticalPundit (self meida writer) | 1 months

According to the British media "The Sun" reported that in the World Cup qualifiers Portugal against Serbia, Ronaldo's "goal" was ignored by the referee, he angrily threw the captain's armband. The armband was taken away by a staff member after the game and donated to a charity for auction to raise funds to perform surgery on a baby boy suffering from spinal muscular atrophy. 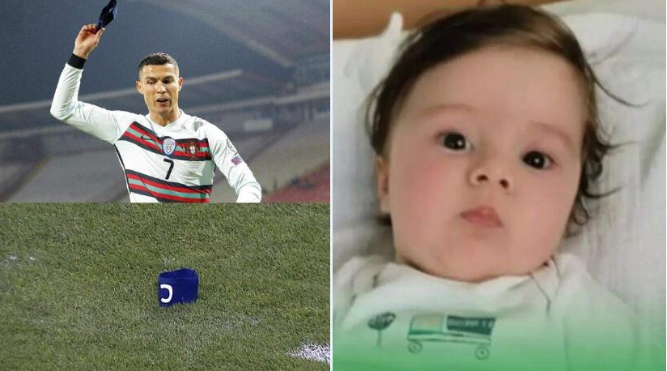 Last Saturday, Portugal drew 2-2 away with Serbia in the World Cup qualifiers. In this game, Ronaldo could have scored a lore goal. At that time, the ball had crossed the goal line but was ignored by the referee. Ronaldo pulled off the captain's armband and threw it on the ground in a rage, and then left the court. A staff member took the captain's armband and donated it to charity.

The charity hopes to auction the captain's armband thrown by Ronaldo on the Internet to raise funds to help a six-month-old boy named Gavril Djurdjevic undergo surgery. This baby boy suffers from spinal muscular atrophy. . The charity hopes to raise approximately 2.5 million euros for the treatment of the baby boy. To help them achieve this goal, the charity will auction the captain's armband thrown away by Ronaldo in the next three days. It is reported that the current highest bid has reached more than 7000 euros.