This season has been fantastic for some football strikers. Some of these strikers have outperformed fans' expectations and may score even more before the season is over. In this article, we will look at the top attacking duos so far this season, which includes both the UEFA Champions League and the UEFA Europa League competitions. Based on the number of goals scored, these players are rated as the top Duos. The players have scored more goals and have excelled in every competition this season.

So far, the top attacking duos are Robert Lewandowski and Serge Gnabry. Both players are currently playing for Bayern Munich and have a combined goal tally of 24. Lewandowski has 17 goals so far this season, while Gnabry has seven. Mohamed Salah and Sadio Mane are currently the second best attacking duos in the world. Both players are currently playing for Liverpool and have a combined goal total of 22. So far this season, Mohamed Salah has scored 15 goals, while Sadio Mane has scored 7. 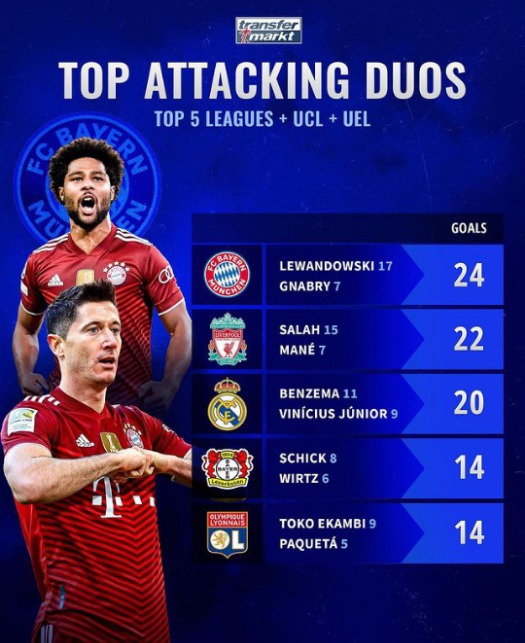 Karim Benzema and Vinicius Junior are the top three attacking duos in Europe's top five leagues. Both players are currently with Real Madrid. Benzema has 11 goals this season, while Vinicius has 9 goals, for a total of 20 goals between the two players. However, Schick and Wirtz are the top four attacking duos; both players play for Leverkusen and have scored 14 goals this season. Schick has eight goals so far, while Wirtz has six.

Toko Ekambi and Paqueta rank fifth among Europe's top five attacking duos. Both players are currently with Olympique Lyonnaise. Toko has scored 9 goals so far this season, while Paqueta has scored 5. These players may score more goals as the season progresses, while some other strikers may be able to crack the top 5 attacking duos table before the season ends.