Gran Metalik was accompanied to the ring by his Luchador partner Lince Dorado. The match began with the phenomenal one starting off with his viscous attacks in his normal fashion. Gran Metalik later came in into the game hitting a big rana. Styles focused his attacked on the leg of of Metalik. This impact worsened the leg of Metalik who tried to rally up some Lucha offence but his leg gave up on him. This gave AJ styles the advantage. AJ styles was going for the win as he jumped up from the top rope for the phenomenal forearm but Metalik avoided it. With a shoulder block, followed up with a calf crusher, Gran Metalik was had no option but to tap out. AJ Styles defeated Metalik by submission to retain his intercontinental title King Corbin started the match by going hard on Gulak. Gulak had Corbin on the ropes and did a flying clothesline and went for the count but the king kicked out at two. However, the power of The King was too much. Corbin hit the Deep Six and the Matt Riddle's music hit and Gulak almost used this distraction to get the win but Corbin kicked out and it was followed by the End of Days for the win. King Corbin defeated the Drew Gulak by Pinfall. The Original Bro stormed the ring to attack The King. Shorty G got involved and planted Riddle with a rolling German suplex before walking off with Corbin. Before the match, Corbin told shorty G he placed a bounty on the original bro. Shorty G turned heel and aligned with Corbin. 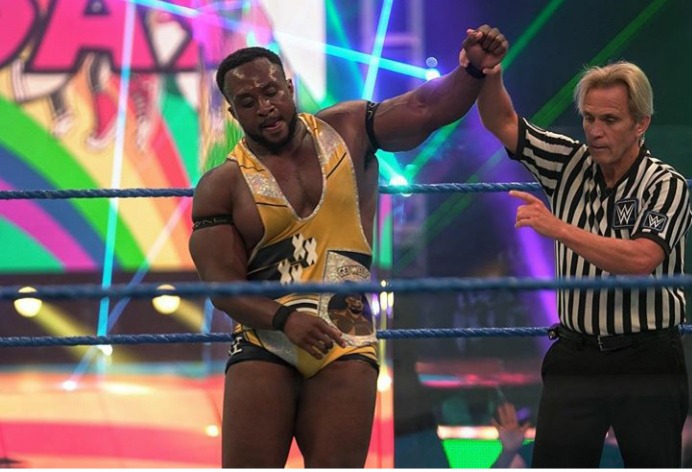 The match beganwith Big E starting off strongly. He seemed to be having a lot of fun until The Miz took a shot at him. This brought out a more violent Big E as he dominated the Miz tossing him around the ring. John Morrison attacked Big E outside as The A-Lister distracted the referee early, allowing Miz to get an advantage over the dangerous powerhouse. Big E later exploded again with three German surpluses and a Big E splash. Morrison later tried to intervene but was caught by the referee and he was ejected. Big E capitalized on this by performing the stretch muffler on Miz and he tapped out by Submission. This was a good start to Big E single run.

Earlier in the day, Lacey Evans made fun of the Naomi on Twitter. She tweeted with the hashtag, #NaomiDeservesBetter before the match. The match started as an aggressive Evans took the fight to Naomi from the start. Evans tried to use Naomi's hair against her but Naomi countered it and ducked a Women's Right and scored a roll-up for the win. Naomi later asked presenter Corey Graves to start a movement #Laceydesrvesbetter as part of her revenge. Otis and Mandy were preparing for their date after Smackdown. Otis went to find his tag team partner Tucker and Mandy asked Otis for a break so she could freshen up. While applying make up, Sonya Deville viciously attacks mandy and cuts of part of her hair. She reaches for the clipper and she tries to shave of Mandy's hair but she is stopped by the WWE officials. Sonya leaves claiming she got what she came for. Nikki Cross tried to start this match off fast, with some strong moves but Bayley shrugged her off repeatedly. Nikki Cross also got the upper hand as she inflicted an injury on the champion by throwing her ribs first into the steel post. This set up Cross to take over the action with a pair of neckbreakers. Bayley was just too good to fall this night though. Cross could not get the upper hand for long. As the challenger attempted a backslide, Bayley rolled through and connected on an arm trap headlock driver for the three count. Cross left angrily after the match and walked out on Alexa Bliss. This left her vulnerable as The Fiend hit the ring and caught The Alexa with the mandible claw. This may be more explanation to her presence in the match at extreme rules between Brawn Strowman and Bray Wyatt