Paul Heyman just shared a throwback picture from the road to WrestleMania 31, and it features himself, Brock Lesnar, and Roman Reigns in a tense sit-down interview.

Paul Heyman is currently managing Reigns, but the WWE landscape was -quite different six years ago. Heyman and Reigns being on opposite sides, as the renowned manager stood in Lesnar's corner at the time."The Beast Incarnate" and Reigns were engaged in a heated feud that led to a buzzworthy match at WrestleMania 31. Heyman shared the picture in question on his Twitter page. 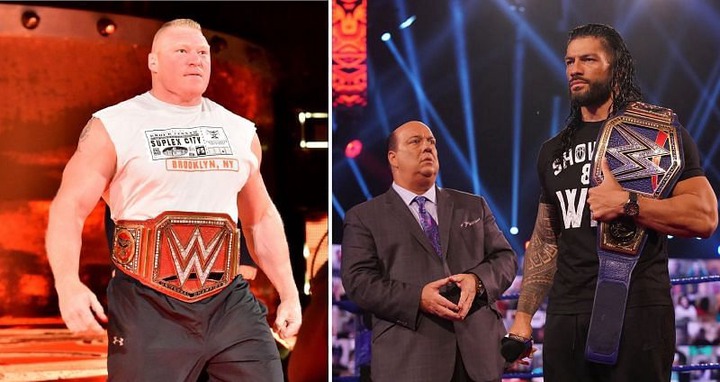 Throughout Lesnar's rivaly with Reigns, The Big Dog often came out on the losing side of the matter. But he finally defeated The Beast Incarnate at WWE SummerSlam 2018 in the culmination of their feud.

At SummerSlam 2020, WWE finally gave the fans what they had been clamoring for a long time — a Roman Reigns heel turn. Just days after his shocking return, Reigns officially joined forces with Paul Heyman. Together, the duo has ruled SmackDown for several months, and Reigns sits on the throne as the Universal Champion.

Some fans wonder whether Lesnar will return to WWE and potentially feud with Reigns. At the moment, Lesnar is a free agent, but Heyman hinted that the former champion could come back for the right match.

"It depends on if there's a worthy challenger and enough box office appeal. Right now, he's very happy being a farmer and a magnificent father to his children. However, if there's something that WWE can offer that intrigues, motivates, or inspires Lesnar, and if the money is right and the business is solid, I'm sure he would be willing to do it."

Paul Heyman and Roman Reigns have tons of history together, and that bond makes their pairing all the more intriguing. Six years after their first storyline at WrestleMania 32, Heyman and Reigns are featured attractions on the road to The Showcase of the Immortals. This time though, they are allies, and Reigns is determined to put down WWE Hall of Famer Edge at The Show of Shows.