What needs to be clarified at the very start of this AEW Dynamite review is that this is the opinion of one reviewer only, because, even on the Sportskeeda writer's chat, we couldn't come to a consensus about whether or not this show was good or bad. While AEW Dynamite wasn't a boring show by any stretch of the imagination, there were some inherent issues with the same.

Of course, you may have a different viewpoint and if you do, you're welcome to chime in and share your thoughts about AEW Dynamite in the comments section below. Did you think that AEW Dynamite was a good show, or did you, instead, think that the show was lacking in some aspects, with Full Gear on the horizon?

One thing that we all agreed upon, unanimously is that this week's edition of AEW Dynamite was all about building new stars and that is never a bad thing.

One can only marvel in excitement at the thought of a potential alliance between Chris Jericho and MJF down the line, leading to the inevitable split. Many have believed his run with Kevin Owens in WWE to be one of the best things The Demo God has done in the entirety of his career, but Jericho and MJF could just eclipse it.

Whatever they're trying to do with Miro on AEW Dynamite doesn't seem to be working, to the point where his WWE booking actually seems to be better. One really hopes that this storyline is shelved in due course of time and Miro gets to be Rusev, The Bulgarian Beast, the gimmick that put him on the map in WWE once more, or something that is a variation of that, because, even though he arrived into the company with a lot of steam, a little bit seems to fizzle out with every passing day, in Miro's case.

One understands that Miro wasn't allowed to be himself in WWE and wasn't allowed to showcase his immense personality as he does on social media and on his official Twitch channel. At the same time, he just seems to be a misfit in this whole Kip Sabian and Penelope Ford storyline, unless the plan is for him to turn on Sabian and destroy him when the wedding does take place.

2 Best: 2 young AEW Dynamite stars show us how it's done

This week's edition of AEW Dynamite started with two young and hungry individuals both of whom have been building up to this match for a long time. Ricky Starks and Darby Allin tore the house down and set the pace for the rest of the show, setting a high bar for other performers on AEW Dynamite. The match was exactly what it needed to be, fast-faced and high-octane and packed with some really good high spots on AEW Dynamite.

We also have another feud developing simultaneously while this one is brewing, and that is Brian Cage vs. Will Hobbs, two big men who can benefit from working with one another on AEW Dynamite.

There is so much young talent on AEW Dynamite and they had a chance to shine on this week's episode. Unfortunately, doing a show only with the underutilized stars in your roster across the board may not necessarily be the best idea. We shall touch upon this in our follow 'Best and worst of AEW Dynamite' point.

2 Worst: The Butcher in the AEW Dynamite main event match

One has to wonder whether Ricky Starks and Darby Allin should have main-evented the show because of the performance they had. Even the FTR match with SCU, while not extraordinary, had more of a build to it and wouldn't have been the worst fit for the AEW Dynamite main event spot. The Butcher vs. Moxley just didn't work.

Jericho vs. Kassidy on the other hand...

3 Best/Worst: Jericho's performance on AEW Dynamite this week vs. the plans for next week 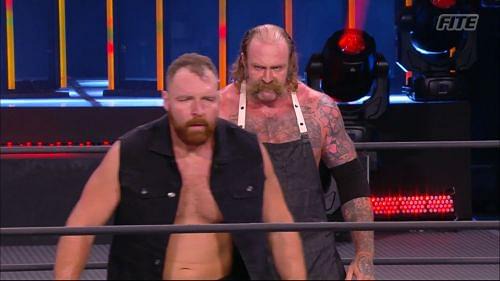 Isiah Kassidy and Chris Jericho had quite the intense match on AEW Dynamite this week where both men took each other to the limit and even in defeat Chris Jericho put the young and upcoming AEW Dynamite star over. There was absolutely nothing wrong with this extraordinary match and kudos to the legendary Chris Jericho for caring about the next generation as opposed to say, someone like Goldberg?

However, having Chris Jericho take for The Chaos Project on his 30th Anniversary celebrations just seems underwhelming to someone who hasn't followed their storyline over the years (this is the point where there was much debate in the Sportskeeda Writer's chat). The match on AEW Dynamite will likely be good but some kind of major build over a few weeks could have made it even better.

One of the main issues with AEW Dynamite is the assumption that everyone who watches the show knows his/her wrestling history inside out because not everyone is necessarily a hardcore fan.