By Alfachicken (self media writer) | 21 days ago 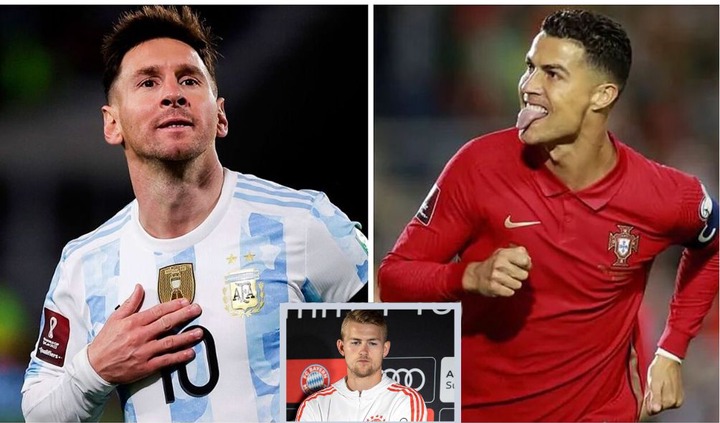 The new defense for Bayern Munich, Matthijs de Ligt, selected Cristiano Ronaldo over Lionel Messi, a former teammate from Juventus. The 22-year-old defender just made an undisclosed transfer price to the Bundesliga champions.

The 37-year-old attacker was given preference by the Dutch defender because they were former teammates. De Ligt commended both of the superstars when asked to pick a favorite.

He chose Ronaldo over Messi, nevertheless, because of his loyalty to Juventus. According to Matthijs de Ligt's comments on ESPN NL:

"Tough choice; the two players are the best of their generation. Cristiano (Ronaldo), with whom I have played, is the obvious choice in my opinion.

Being a former teammate of either Lionel Messi or Cristiano Ronaldo does not necessarily mean that the player would choose the other.

Former Manchester United forward Dimitar Berbatov recently reappeared online with remarks in which he preferred Messi to Ronaldo. Even though the Portuguese striker played with the former Bulgarian forward during their first season together at Old Trafford.

Both Lionel Messi and Cristiano Ronaldo are nearing the end of their respective careers. Knowing that it might be their final appearance in the most prestigious competition in world football, the pair will compete in the 2022 FIFA World Cup in Qatar.

It's important to note that Messi and Ronaldo will both lead their respective nations in the tournament in Qatar.

Cristiano Ronaldo and Lionel Messi have both never been World Cup champions. The tournament's biggest chance of success belongs to Messi. His Argentina squad lost to Germany 1-0 in the 2014 FIFA World Cup final in Brazil.