Former NXT Women's Champion Rhea Ripleyhas been one of the most impressive young WWE Superstars recently. The inaugural NXT UK Women's Champion has currently been in a feud with Robert Stone and Aliyah on NXT. 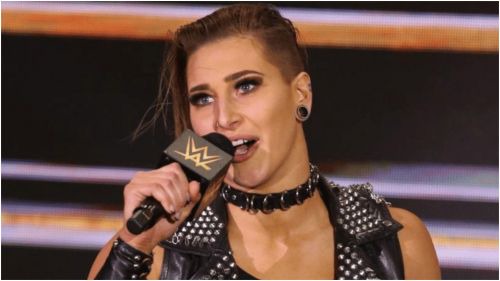 Rhea Ripley recently took to Instagram where she posted a picture of herself alongside her boyfriend Demetri "Action" Jackson, where she revealed her new look. Rhea Ripley now has blonde hair and looks as amazing as before, if not more.

Rhea Ripley then joined the NXT UK roster where she competed in a tournament to determine the inaugural NXT UK Women's Champion. She defeated Toni Storm in the finals to win the title and held onto it for 139 days before dropping it to Storm at NXT TakeOver: Blackpool in 2019.

She then joined the NXT roster and led the NXT women's team in the Survivor Series 2019 PPV in the 5-on-5-on-5 traditional elimination match against Team RAW and Team SmackDown. She last eliminated Sasha Banks to win the match for her team.

on an absolute surge for the past several months, dating all the way back to Survivor Series in November.

Rhea Ripley went on to defeat the then NXT Women's Champion, Shayna Baszler to become the first woman to win both the NXT and NXT UK's women's titles. The 2020 Royal Rumble winner  Charlotte Flair  challenged her for the NXT Women's title which led to a match between the two at WrestleMania 36. After an intense rivalry and match, Flair defeated Ripley at 'Mania to become the new champion. But Rhea Ripley highly impressed the WWE Universe with her performance.

After taking out the Robert Stone brand at NXT Great American Bash, it is to be seen what is next for her!