By Reippblog.com.ng (self media writer) | 1 year ago 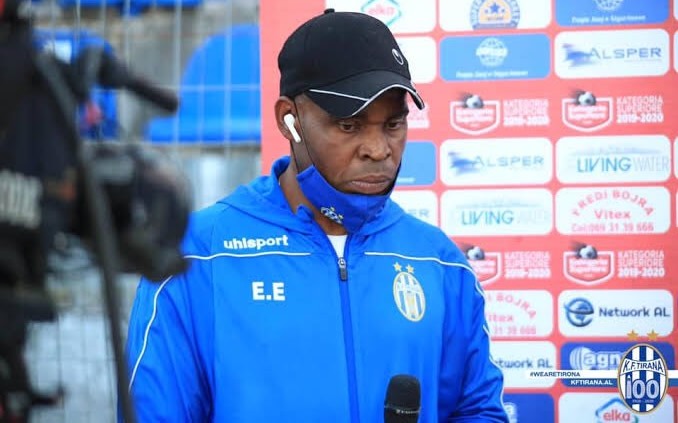 Ndubuisi Emmanuel Egbo, a former goalkeeper of Super Eagles and KF Tirana Football Club led his team as the head coach to win the 2019/20 Albania League title over the weekend.

Ndubuisi Emmanuel Egbo was born in Aba on the 25th of July 1973. He started his football career in Lagos. He played for few clubs in Nigeria such as Julius Berger FC, Lagos Nepa, Abuja FC, NITEL FC before seeking for greener pasture outside the shores of Nigeria as a footballer. During his professional career he played for El Masry SC in Egypt, KF Tirana and FK Bylis Ballsh in Albania. The Nigerian football manager who is currently the manager of Albanian club KF Tirana also played as a goalkeeper during his professional career, representing the same team and won three trophies.

Egbo was also a played for the Super Eagles as their goal keeper. He played 12 matches and represented the country in two tournaments of African Cup of Nations.

Egbo had 12 appearances for the Super Eagles between 1999 and 2002 at the same time he was manning the goalpost for Tirana.

Later in 2019, the former Super Eagles Goalkeeper was promoted to become Tirana’s head coach. Egbo has proven himself to be a great coach with the result he has gotten so far, especially for winning the Albania league title in his first year in as a head coach. This achievement is of historical importance to KF Tirana because they will be celebrating their 100th anniversary this month. Apart from winning the league title, Egbo stand the chance of clinching a domestic double title on the 2nd of August, when they will face Teuta Durres in the Domestic Cup final. Egbo Emmanuel Ndubuisi, 46-year-old is now the first Nigerian coach to win a title with a European league side and earning a spot in the European champions league. He is believed to be the first African to achieve such a feat.

I believe it's high time great clubs like Chelsea, Madrid, Arsenal, Barcelona, Bayern and others begin to look in the direction of African coaches. African has a lot of good coaches too. It is also important for Africa countries to stop looking for foreign coaches and begin to give more opportunity to African coaches.

What is your opinion on European clubs getting African coaches..

Chelsea 7-0 Norwich: The Performance Of Chelsea Is A Proof That Lukaku's Poor Form Is His Fault.

CHE 7-0 NOR: The ball is Tuchel's court after Hudson-Odoi responded to his criticism by playing well

Official: Chelsea Superstar Wins Man of the Match award after his outstanding performance

Marseille vs PSG Predicted line-ups and all you need to know.

CHE 7-0 NOR: 7 Chelsea Players That were Outstanding in the Match