Euro 2020: See What Breaking Germans' Resistance At Wembley Meant To The Sterlings (Picture)

Tuesday, June 29 was another memorable day for Raheem Sterling and family after he put England on the path of victory against Germany in a 2020 Germany European Championship round of 16 tie at Wembley Stadium. 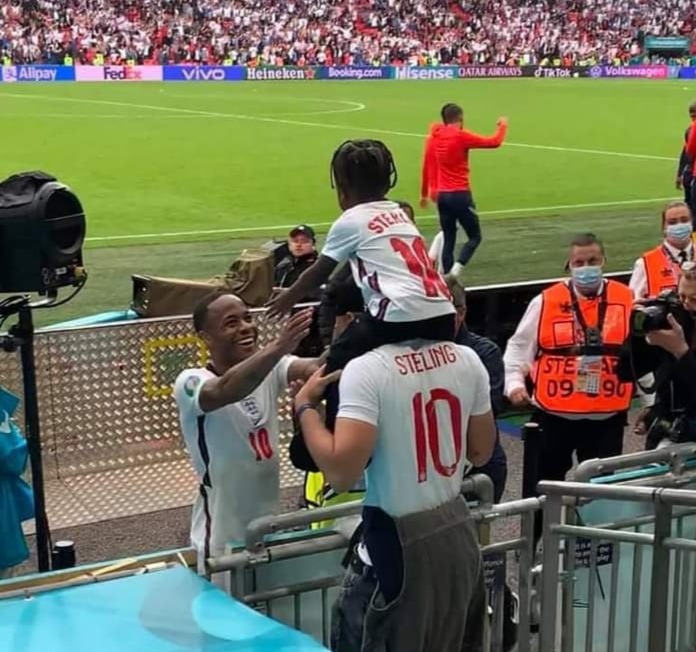 The Manchester City player had scored two goals prior to the keenly contested encounter, but breaking the dock late into the game meant more to the player who celebrated the feat with partner, Paige Milian and daughter, Melody Rose Sterling in the stands, as depicted by the picture above.

The Kingston, Jamaica-born broke the Germans' resistance on 75 minutes, by finishing off a move he started, assisted by Like Shaw. Menacing Sterling drew praise from England boss, Gareth Southgate and former Liverpool and England team-mate, Daniel Sturridge, who described him as England's most underrated player.

The effort also meant a lot to England, who went past that stage the first time in several years, and will face Ukraine in a quarter-final clash at Stadio Olimpico in Rome on Saturday.

The goal that blazed the trail for Harry Kane's 86th minute effort was Sterling's third of the tournament, having earlier scored the decisive goals in 1-0 wins over Croatia and Czech Republic at the group stage.

Sterling is currently third on the scorers chart behind Cristiano Ronaldo, who has five goals and already exited the tournament with Portugal and Czech Republic's Patrik Schick, with four goals.

He has now scored 17 times in 65 matches for England since coming through the ranks in 2012.