By DejiOmotoyinbo (self media writer) | 2 years ago 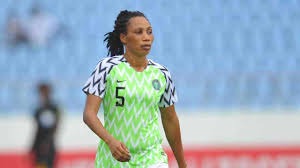 It is a very rare occurrence in Football. A defender winning a Player of The Year award. It hardly ever happens and when it does, a few eyebrows are raised, sometimes even by the award recipient.

That was the scenario that played out at the maiden edition of the Ballers Awards in Lagos last weekend when Super Falcons defender Onome Ebi took the Player Of The Year Gong.

The player was to say the least stunned to have won the award ahead of more obvious choices like National teammate Asisat Oshola who just claimed a record 4th African Female Player Of the Year at the CAF awards.

An obviously surprised Onome after stepping up to the stage to receive her diadem said “I am really shocked. Defenders hardly ever win awards”.

In the 63 Year History of the World’s most prestigious awards, The Balon D’or, only two defenders have ever claimed the top prize. Franz Beckenbauer in 1976 and Fabio Cannavaro in 2006 after leading Italy to the World Cup.

In Africa, defenders have fared worse as none has ever been named African Footballer Of The Year since the awards started in 1970, 50 years ago! In actual fact, Goalkeepers tend to earn more recognition as both Thomas Nkono of Cameroun and Morroco’s Baddou Ezakki have won the award previously.

So why exactly are the players who protect the goal line not given due regard in the game? Why heap all the accolades on the strikers despite the popular football quote:

Truh is, for all their talent and goalscoring prowess, 11 Messis or 11 Ronaldos on a team will win absolutely NOTHING!

A number of reasons might help us understand and appreciate the tendency to always tilt to the side of the strikers when awards come up,

1.  FOOTBALL IS ALL ABOUT GOALS

Goals! Goals!! Goals!!! That is the name of the game and that is what fans want to see. No one gets excited by a game defined by a defensive masterclass that ends goalless. Fans would rather watch an error strewn game that ends 5-4 for the sheer number of goals scored despite any defensive blunders. It is what it is

A striker may miss many chances but as long as he puts some away, he will earn some accolades. Any error by a defender is scrutinised over and over again especially when it leads to concession of goals. You get the feeling it’s a no win situation for the men at the back.

Due to the position they occupy on the field of play, defenders naturally end up with more fouls leading to more red cards which has the tendency to cost their teams and ultimately earning them a bad boy image. As well as Spain and Real Madrid Captain Sergio Ramos has played for his teams, his disciplinary record will always count against him.

Naturally, it is the players who get the goals that are the most loved and adored. The strikers and the creative midfielders grab all the attention and are usually the darling of fans and the media alike. A defender has to be exceptionally good to get anywhere near that level of adulation.

It’s unfair! A defenders job is to stop goals, not score them! And if they do that job well, they should be appreciated. Yes they usually are. Except, the football fraternity doesn’t seem to give them their just desserts despite doing their jobs well. Ironic!

Over the years, there has been a growing perception in Football that the strikers are more important in a team. Yes you need someone to put chances away but even with the best goalscorers on a team, without the men at the back who put their bodies on the line, the Messis and the Ronaldos will not shine.

Content created and supplied by: DejiOmotoyinbo (via Opera News )