By Owenz (self media writer) | 2 years ago

Two goals from Karim Benzema gave the Madrid giants victory and consequently, the trophy, as a defeat by Barcelona 1:2 to Osasuna, the same night ensured that Los Blancos became champions of the La Liga for the 34th time.

The Victory Yesterday meant Los Blancos won their first La Liga title in three years to end Barcelona’s dominance of the La liga for the said years, with a game left and a seven points difference between themselves and Barcelona.

After the game, the Madrid Boss, Zinedine Zidane who returned to the club early Last year said;

“This is better than anything. It takes tremendous effort to win La Liga”.

By Lifting the Spanish La Liga trophy yesterday, it meant Real Madrid had won the League Eight (8) times more than Barcelona, and the second La Liga trophy for the Madrid Boss who did win the League during his first tenure in 2017. 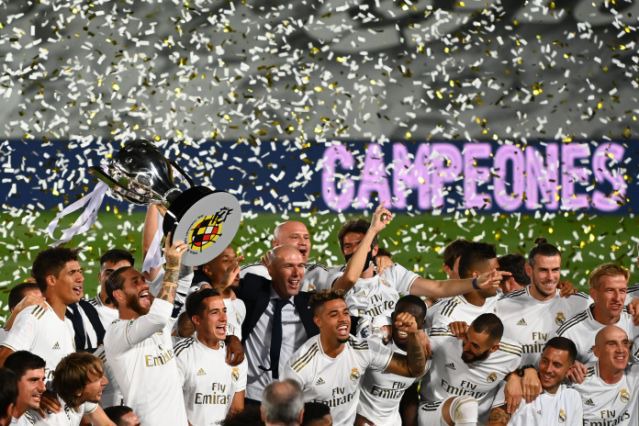 Barcelona were top of the La Liga table with two points when football in Spain was put on hold indefinitely in March, 2020 as was the case in Major Leagues all around the world by reason of the Corona Virus Pandemic that ravaged the World.

At the time, it seemed like an impossible task to overthrow the Blaugrana going by their scintillating form at that time. However, Upon the resumption of the League, there has been a change in fortune, as the Los Blancos has since been in a tremendous form, winning ten straight games, whereas, Barcelona has had to endure a pitiable run of form during the same period with just six (6) wins in their last ten games. With the safety precautions still in place by reason of the Corona Virus Pandemic, it means Los Blancos cannot celebrate their great victory with the Madrid Fans. Nonetheless, the fans as always will be dancing round their homes, apparently ecstatic in their nature.

Now, the focus of the Madrid squad will ultimately be switched to winning the UEFA Champions league.

IT IS INDEED A GOOD TIME FOR MADRID FANS ALL AROUND THE WORLD.

HALLA MADRID!! THE MOST PRESTIGIOUS CLUB IN SPAIN.

Content created and supplied by: Owenz (via Opera News )