By Hareeohye (self media writer) | 2 years ago

Liverpool manager Jurgen Klopp was left lost for words as Alisson and Virgil van Dijk both made crucial errors which cost them in a 2-1 defeat to Arsenal in the Premier League.

Jurgen Klopp has become accustomed to excellence from his Liverpool side this season.

The Reds have dominated the Premier League and become known for their alarming consistency and lack of errors en route to their first league title in 30 years. 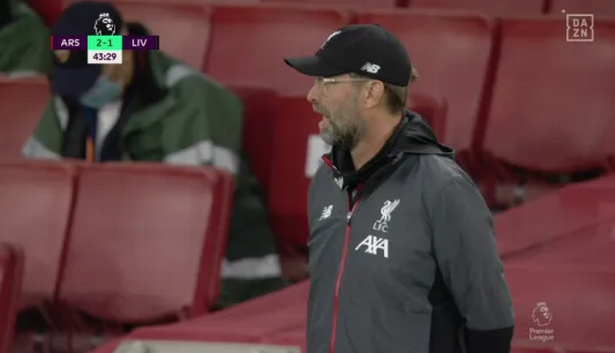 It is understandable, then, the Klopp was left lost for words as errors from the ever-reliable Virgil van Dijk and Alisson Becker cost his side.

Van Dijk first made a mistake, allowing Alexandre Lacazette to equaliser after Sadio Mane had opened the scoring.

And he was left open-mouthed when Alisson gave the ball away to Lacazette, who squared to Reiss Nelson to score what turned out to be the winner.

The German manager stood speechless before making his way back to the bench and simply sitting down and shaking his head in disbelief as he was left angered by two errors costing them their dreams of breaking the 100-point mark.

After the game, Klopp said: "Today we made some human errors, which is not so nice but not completely surprising that it can happen whenever. Tonight it happened.

"Usually we learn from situations like this, we will do that now again.

“The boys don’t want to hide or say, ‘It’s not my fault’ or whatever, that’s all clear on the table.”

Van Dijk was asked if mistakes had become more common because they had secured the title but dismissed that notion.

“If you watched the game then you can see that until I made a mistake, there was nothing wrong. We played well, I had a feeling we could win here comfortably at one point, but obviously if you give them the goals you see what happens.

“Unfortunately I made the mistake, I take the blame for it of course. I take it as a man and we move on.

“We’ll try to win the last two games and get a well-deserved break, but we don’t need to forget that we had a fantastic season already.”

Content created and supplied by: Hareeohye (via Opera News )