I Signed for two years and I see myself leading this group of players next season: Ronald koeman

By Emmybillion1 (self media writer) | 1 year ago

Koeman: "I don't think the league is out of our reach. We are in the same situation as before. There is one less game left, with Atlético ahead, but we must not think about the others but about winning our games."

Koeman: "The Super League? I cannot comment on this issue. It is a case that falls to UEFA and I don't know if they are capable of taking Barça out of the Champions League, but to this day I'm not interested either."

Koeman: "We play with two 18-year-olds in midfield and two 20-year-olds in defence. You have to keep everything in mind and know where we come from. We've won a title and we've improved."

Koeman: "I don't feel undervalued. For me, the people I work with every day are important. I cannot win a battle against the press. I know that during many moments of the season we have been highly valued."

Koeman: "Araújo? Ronald was injured for a while and it was difficult for him to reach his physical level. Now he's fine, he played a great second half against Atlético. He can play in various positions in the defence."

Koeman: "I watched the first 20 minutes of Real Madrid against Sevilla, but then I switched to AC Milan against Juventus because I get nervous... I preferred to watch another game where we have no direct interest and then find out about the result."

Koeman: "We must highlight the attitude of Araújo, Mingueza, Pedri and Alix... At the beginning of the season, nobody could imagine that these four players would have so many minutes and so many games. They have taken the opportunities that the coach has given them.

Koeman: "Barça today is a team with more future than other teams."

Koeman: "Pjanić and Riqui Puig? We have a team in which I don't make many changes. It depends on training, technical decisions and game systems. Many things influence the decisions of how many minutes they have. Those we don't play have to be prepared."

Koeman: "The president showed me his confidence from the first day and it is him who must decide. I signed for two years here and I see myself leading this group of players next season." 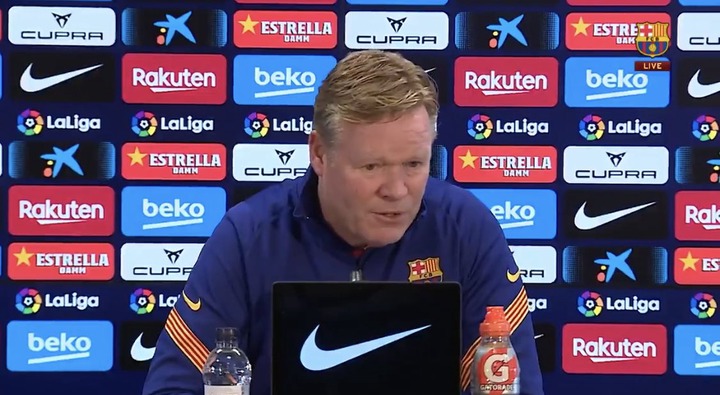 Content created and supplied by: Emmybillion1 (via Opera News )