Croatia beat Scotland 3-1 to reach last 16 of Euros, as Scotland miss out

By Believefelix007 (self media writer) | 1 year ago 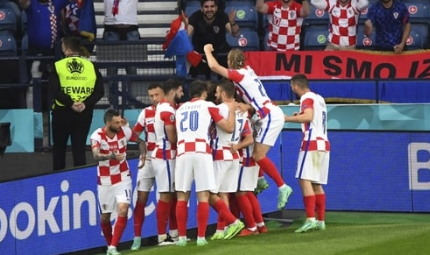 June 22th, 2021- Croatia qualified for the last 16 of the European Championships with a 3-1 win against Scotland in Hampden Park on Tuesday night.

Goals from Nikola Vlasic, Luka Modric and Ivan Perisic gave Croatia a win they deserved for their control of the ball to dash Scotland's hopes of reaching the knockout stage of the tournament for the first time in their history.

Scotland were without Billy Gilmore with Stuart Armstrong coming in for the midfielder, who has tested positive for COVID-19 in Steve Clarke's only change to the side that drew with England on Friday night.

The Scots looked to impose a high pace on the game to stop the Croatians settling on the ball, but the visiting side soon gained control of the match and started to ping the ball around the pitch.

Croatia took the lead in the 17th minute when the impressive Perisic nodded a cross back for Nikola Vlasic to put his side ahead.

The Croatians continued to control the ball, moving it around comfortably, with Perisic a constant threat down their left flank.

However, the Scots never let their heads drop for a moment and just when Croatia were starting to look comfortable, they equalized just before halftime. Croatian defender, Dejan Lovren failed to clear an Andy Robertson cross in the 42nd minute, the ball fell to Callum McGregor, who thumped it home from outside of the penalty area.

Scotland were probably frustrated to hear the halftime whistle just as they had got back into the game and Croatia began to regain control in the opening minutes of the second half as they got their passing game back together and Josko Gvardiol began to control his flank, although the left back almost allowed John McGinn a chance from a narrow angle.

Croatia retook the lead in the 62nd minute when Modric scored a magnificent goal with the outside of his foot from outside of the Scottish area after Bruno Petkovic had laid the ball back to him.

Knowing a draw would serve neither side, Croatia looked to extend their lead and got a vital third goal in the 77th minute when Perisic flicked home Modric's corner from the near post to see his side though in second place in the group.