By Football-Stats (self meida writer) | 27 days 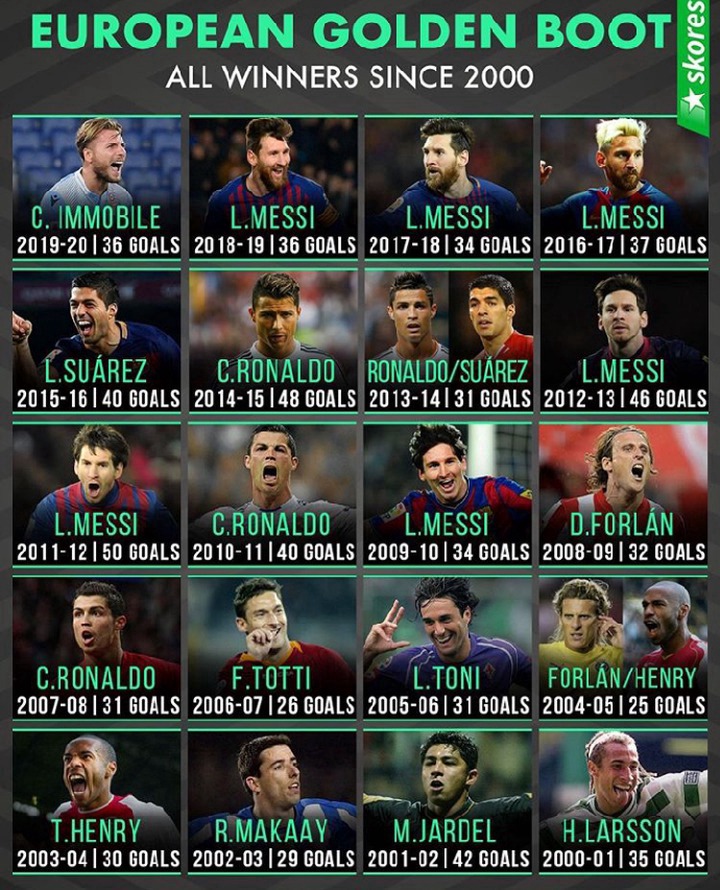 Cristiano ronaldo and Lionel messi are currently the players who have won the most golden boot in Europe's top five leagues. Golden boot award is an individual title awarded to the player who scored the most league goals in a season. This is not easy for footballers who play In tough leagues. However, Ronaldo have only won the European Golden boot on four separate seasons in the last 20 Years. lionel Messi have won three golden boots more than Cristiano Ronaldo.

Barcelona Captain's 50 goals in 2011/12 seasons remains the highest number of goals scored by a golden boot winner. However Cristiano Ronaldo is 36 years old and have scored 25 serie-A goals this season. The player who would likely win the European Golden boot this season is Robert Lewandowski, he has scored over 30 league goals this season. Ronaldo has scored two league goals more than Lionel Messi this season. Ronaldo would likely not win European golden boot again because there are players like Haaland and Mbappe who are contenders for the Award. His retirement is almost close by, he might not able to win the golden boot award again.

Opinion: 2 Reasons Why Chelsea May Need To Sign Another Left-Back In The Upcoming Transfer Window

How The EPL Golden Boot Race Looks After Kelechi Iheanancho And Callum Wilson Both Scored Yesterday.

4 Matches To Go, Can Edouard Mendy Win The EPL Golden Boot? See His Position On The List

English Premier League Table Ahead Of Matchday 35 Fixtures On Saturday