By Ibinabo (self media writer) | 2 years ago

The English FA Cup returns this weekend with four Premier League heavyweights challenging for two places in the finals. The FA Cup been the world's oldest cup competition is on its semi-final stages in the 2019-20 season. Furthermore, its a battle of London vs Manchester as Arsenal FC takes on Manchester City on Saturday July 18, 2020, while Chelsea FC takes on Manchester United on Sunday, July 19, 2020. Both matches will be played at Wembley Stadium with the teams hoping to make it through to the final at same venue within August, 2020. 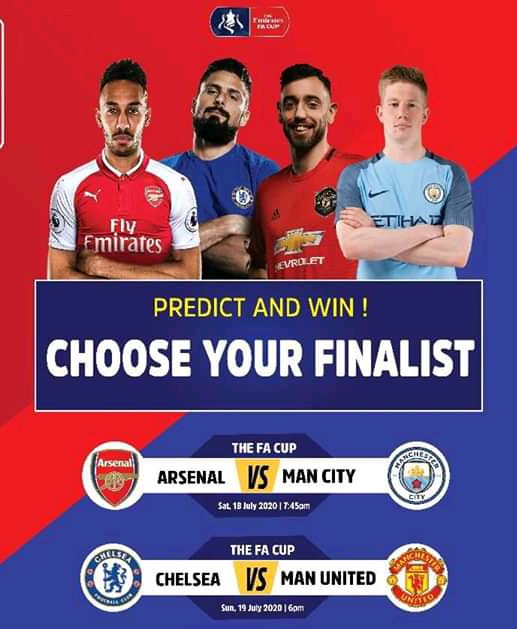 Consequently, Kelvin Garside will be reporting on the games and analysis on both matches will be extensively done online and electronically on I's mobile app. However, on a preview of matches, starting with Arsenal vs Man City on Saturday, July 18, 2020. Arsenal's ambush of Liverpool in the Premier League is a proxy alert to Man City; a subtile reminder that superiority is no guarantee. The two gladiators will challenge for a place in the finals to either face Chelsea or Man Utd whom will play their game on Sunday, July 19, 2020. Mikel Arteta and Pep Guardiola will go into an epic battle with a win as the ultimate price for both managers. Similarly, Chelsea vs Man Utd provides a mouth watering clash for football viewers across the globe; with the two teams at similar stages of rebuilding, coached by former players who seem to be gaining stable respect from their peers. The both teams are locked in the fight for Champions League qualification and would do anything to avoid a defeat. While the Manchester United team is spoiled for form as the league resumed after the Covit-19 break, their Chelsea counterpart has been unstable in form with its array of young players. However, the Frank Lampard soldiers are blessed with decent touch and movement that can hurt any team on a good day; but are lacking in character, experience and leadership. The likes of Willian, Pulisic, Kovacic, Mount and Giroud can do unexpected and unimaginable damage to any team when their spirits are on a high. The 2019-20 English FA Cup Semi-Finals will be an interesting contest as fans and spectators will be given the opportunity to view some exciting and top class football matches. Enjoy your games!

Content created and supplied by: Ibinabo (via Opera News )